Last weekend, I declared a Selfish Sewing break to help get out of my sewing funk - which I entirely blame on the wedding gift aprons that I've completely lost interest in. I managed to complete 2 tops, and worked a bit on a UFO that's been in the works since June. Today, I want to show off one of those two tops, a knit t-shirt from New Look 6907. 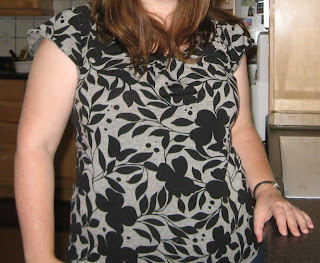 I've made this top before, for the PR wardrobe contest last summer. I simply adored the shirt, and wore it constantly. I still do, but less so now because it's starting to get pitted, and I really should get around to mending the unraveling neckline one of these days. But I probably won't because tossing a cardigan on top hides all of the problem spots!

Anyways, I made this top from 1 m of poly-blend mystery knit that I picked up from the end of bolt section at Fabricland for about $5. It was picked up for exactly this pattern (about a year ago), so go me for sticking to a plan!

As with the older version, I cut a size 12 (I normally use size 16 - this pattern runs large) and eliminated the centre back seam. It's a knit, why would you need ties at the back unless you actually like the design element? Which I don't, thus no centre back seam and ties. 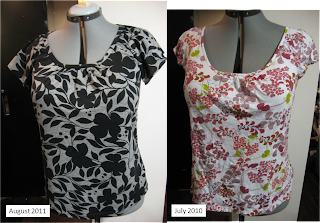 Of course, this meant changing the neckline binding piece. Last time, I cut it pretty long, not accounting for stretch. (Also last time I cut out the wrong pattern piece, hense why the binding is much thinner on the old version. Whoops.) This lead to a much wider neckline overall. While it's very flattering, it's so wide that sometimes my bra strap shows, and I have to be careful when I lean over. This time, I cut a length of fabric 29 inches long (the neckline itself measured somewhere around 35 inches), sewed it into a loop, and stretched it to fit around the neckline. This has lead to a higher and snugger neckline that doesn't gape at all, as you can sort of see above. Next time, I'll probably add another inch or two to the binding, as I really had to stretch it to cover the entire neckline.

I really like the neckline. The height is perfect, and the gathering on the front and back is lovely. In the original pattern, you're supposed to leave a slit along the centre back seam, and the neck binding creates ties. There is gathering on the back, but on either side of the slit. I simply gathered all of the fabric between the two outer marks, making sure the final length was about what it should've been if the slit was there.

The other major change between the two versions is the sleeves. In the older version, I included the elastic ans casing indicated in version B. I suspect that I made the elastic too tight (a mistake I've made a couple times now - elastic is hard!), and found it a bit uncomfortable. In this latest version, I chose to simply make a 1/4 inch rolled hem and leave the sleeves fluttery. I really like the effect (and it's far more comfortable!), except that the rolled hem has a habit of flipping up. This is something I've encountered before, and I really should've learned my lesson by now. NOTE TO SELF: 1/2 TO 3/4 INCH HEM NEXT TIME. 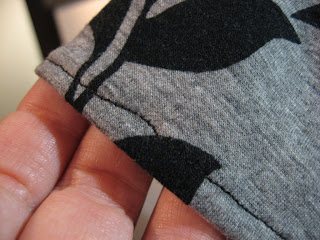 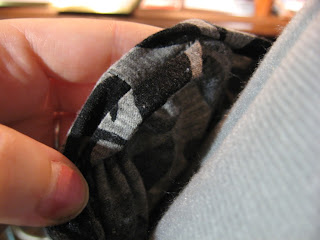 Also, after a year of fighting with it and often putting on the original version backwards, I opted to attach a small tube of self-fabric to the back on the inside to easily differentiate between the front and back. Someday I'll make my own tags, but for now, this works.

I don't really have a picture of it, but I finished all the inside seams by zigzagging next to the seam line. It makes me smile when I see seam finishing inside of my garments!

I love this pattern (with my alterations), and I really like this top. The only downside is my shoddy choice in material. I thought it was a decent knit, but this proves I still have a long way to go in fabric choices. It's obviously a poly-something, since it doesn't breath, doesn't wrinkle, and piles like a mofo after only 3 wearings. ARGH! 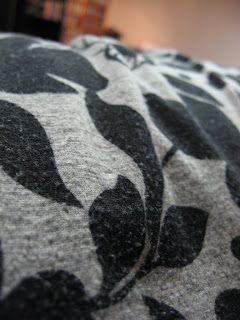 Oh well. I will definitely be making this pattern again (and again, and again). I think it will take well to some design changes too. I was thinking of how I could alter it to resemble this top made by Tanit-Isis, but then I realized that a band around the hips would be a really bad idea for me. Still, I have some ideas. More on that in my next post, where I'll be showing off some of my recent (thrift store) fabric finds, and the ideas they've inspired! 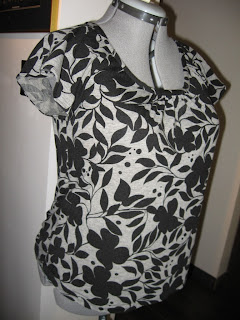 Anyways, big round of applause should go to Mabe, my lovely headless sewing assistant. This is her first time out of the box since I received her for Christmas, and I think she did a lovely job modeling, don't you? Even if she's a little smaller than me around the middle...darn her and her flat tummy!