Back in August or September, I found this adorable cardigan at a local consignment shop.  Despite how the Boyfriend feels about them (and boy does he have strong feeling about them), I adore polkadots!  What person in their right mind doesn't?!  So of course, I had to bring it home with me, to damn with how it fit.

And boy did it not fit.  I guess it wasn't too bad, but bad enough that I proceeded to not wear it at all (despite the polkadots).  See how thrilled I look?  It was too wide across the shoulders, too wide across the body, and the armpits were about 2-3 inches away from mine when I stretched my arms out.  And it looked awful unbuttoned.  What's a sewist to do?!

Obviously shove it under the sewing machine and hope for the best.  So I did just that, right before leaving for camp again in January*, marking out how much and where I wanted to take it in, and then sewing it up.  Well, one side of it, anyways.  And then abandoned it in last-minute work preparations.

First thing I did on getting home last week was trim my seam allowance from the one side...

...then taking a page from Lauren method of transfering aterations from one pant leg to the other, I folded the cardigan in half and traced out the seam allowance, then sewed 1/4 inch away from that line.  Easy peasy.  A bit of trimming and I was done!

Well, other than a bit of quick handsewing to close up the front so that it went from cardigan to sweater.  This is the one time I prefer a sweater to a cardigan.

And Voila!  A nearly instant (if you ignore the months I dithered over this) sweater that I've barely taken off since fixing!  Look!  The armpits are actually close to mine!  Much better.

Also, remind me to never wear my hair up ever again!  YEASH that's not a good look on me.  (And no, I'm not fishing for compliments - at least, not on my hair!  lol)

* Oh yeah, did I forget to mention that?  The silly mine called be back, again.  This time as a production geologist in a more essential (and less expendable) position, so here's to hoping that I don't get laid off from them a third time.  But if I do, at least I'm an old hat at it?  lol
Posted by Heather at 8:13 PM 5 comments:

Alright, I'm not going to babble much a lot apparently.  Or at least, I'll try not to.  I think I've gone about as far as I'm going to with these pants for now.  I am so sick of looking at my butt in photos.  There's no waistband attached yet, but I was just trying to get the pattern into useable shape.  My next step is to trim down seam allowances, rip these apart and trace off the pattern, then resew them.

NOTE: I did a bunch more alterations on the left leg (on right side above) to narrow up the pants from WHY SO DAMN WIDE to wearable.  Instead of trying to duplicate this on the other leg, I'm just going to deal with it when I recut these, and try to remember which leg to trace off for the pattern.

Considering that I took off a total of 3 inches of width (which, might I remind you, is doubled, so actually 6 inches of width cripes), it shouldn't be hard to figure that one out.  But this is me, so...

I spent all day yesterday, futzing with the blasted crotch curve.  SO TIRED OF LOOKING AT WRINKLY BUMS OMG.  I gave up.

It fits about the same as my RTW - which isn't great, but I'm tired of bums that aren't my boyfriend's.  I suspect half the problem here is that I've *ahem* put on a bit of weight since last April, and they're a bit...tight.  I'm going to add about 1/8th inch to the seam allowance when I resew these, just to take them from obscenely tight to (hopefully) snug.  And I think I need to slap some patch pockets on those cheeks, because wow that's a lot of denimed bum.

Front is looking wrinkly, but this mostly because there's no waist band and oh dear god are they tight across the hips.  I like them tight though.  So obviously I'll need to hike them up with a good waistband.  That little wite line in the second photo shows where I want the bottom of the 2.25 inch waistband to go.  Thereabouts, anyways.  And yeah wow, need to take out that side seam at the hips a bit.

Anyways, I've babbled way too much about these.  Here is where they stand.  Will do more tweaks when I resew this.  Tomorrow though, I'm going to tell you about that sweater I'm wearing!
Posted by Heather at 8:16 PM 8 comments:

I Declare Today a Sewing Day!


Now, will I work on these pants: 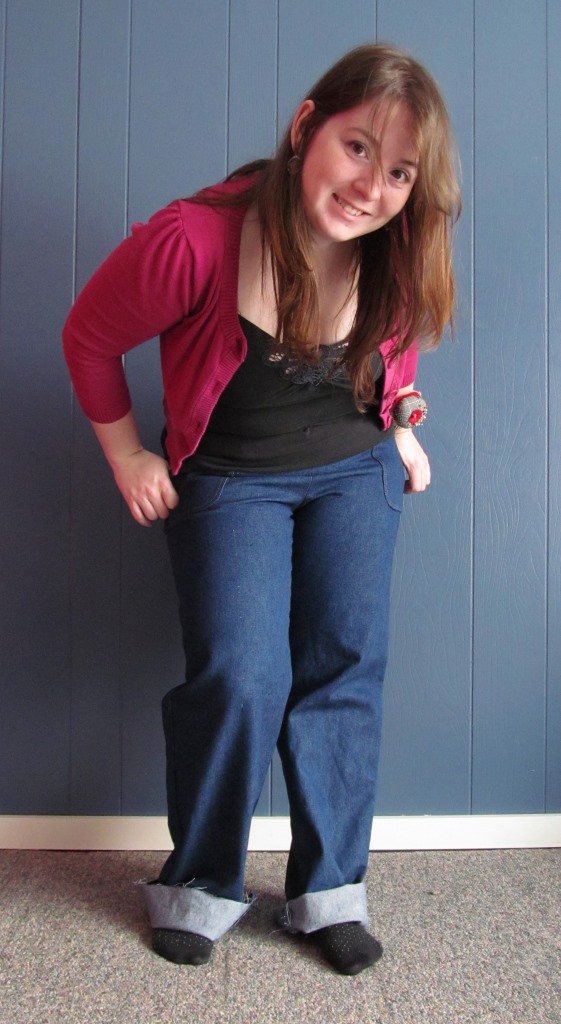 Or work on the Hummingbird skirt I've been wanting for ages and that Stacie has recently made (twice) and resparked my interest in?

Or some other random pattern that catches my interest?  I GUESS WE'LL SEE!!
Posted by Heather at 3:03 PM 4 comments:

A Year in Temps - A Conceptual Knitting Project

Welp, my plan for today was to sew, but I should've known better, especially considering a doctor's appointment this morning and a dinner party to bake a pie for this evening.  No matter, I'll spend today sewing instead.  I'm itching to get back to those pants I was working on last spring.


I started another knitting project last night, one I've been itching to do for a while.  It's a bit of conceptual knitting, where you knit a scarf with different yarn colours representing daily temperatures for a year.  Someone started this last year over at Ravelry, and there are now 100's of these scarves popping up in the projects section!  So many people were diligent and recorded the temps each day, and knitted their line or two of stitches in the corresponding colours.  Others chose to download the temps for the year they wanted and knit it all in one go.

I'll be in the latter catagory.  I decided to knit a scarf representing the temps for the very first calender year I've spent in Whitehorse!  Maybe I should've started on the day I arrived in the city, but I thought doing one for 2013 would be fun. 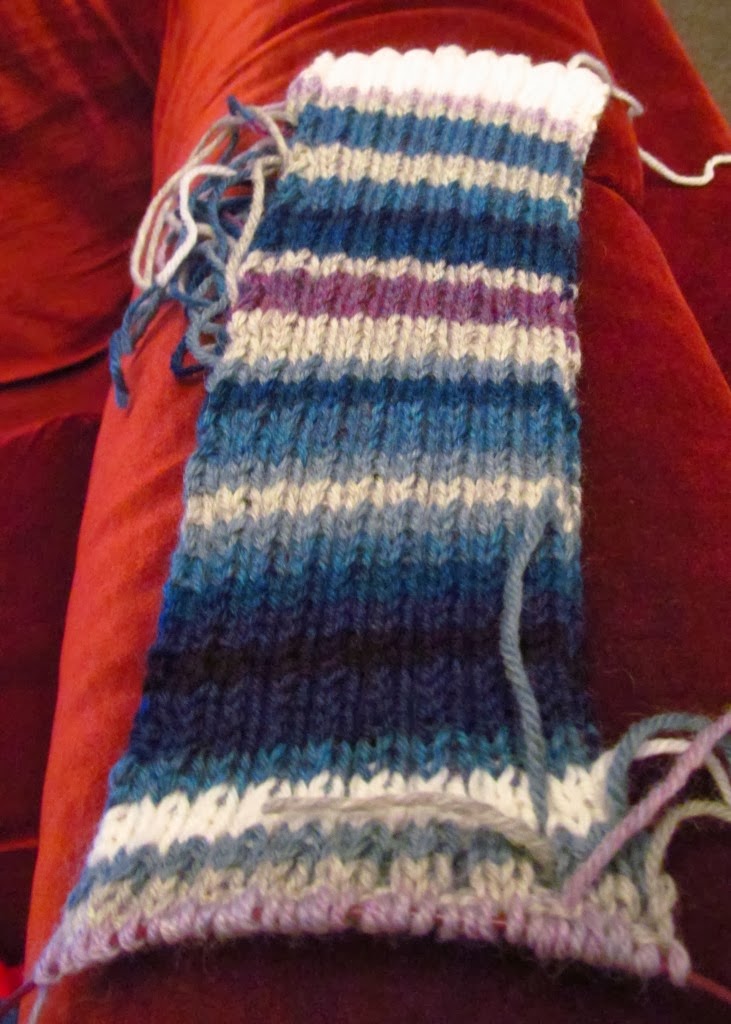 It's funny, I've just finished knitting January (between the white sections), and I distinctly remember the warm spell we got mid-month (shown in the purple), with temps around 7-8C (or average daily temp of 2C - I'm doing averages), and I remember the blisterly cold spell we got near the end of the month (that dark blue and black section), with temps around -42C.  I think this is going to be a very fun knit!

I just sort of wish I'd made it a bit wider.  Not going to go back to reknit, as it'll be around 9 feet long as it is, and that just means I can wind it around my neck more.  I'm also hoping that blocking will open up the ribbing a bit more.

Anywho, I hope I finish this project quickly (other than sewing in over 350 ends - and I'm not even exaggerating), because I've signed up for a Knit Along (KAL) over at Holla Knits - making up the Eastwood Cardigan with another haul of yarn I recently bought at Knit Picks.  Because I needed another knitting project.

One of my very best friends just moved into a new place, in a new city, in a new province even!  Her and her hubby packed up a UHaul full of everything they owned in Toronto, ON, and drove it straight across the country (with a brief stop-over in Manitoba to visit family) to Edmonton, AB.  For two people who haven't driven much in the last 5 years, this was apparently a bit of a nerve-wracking trip, especially in parts of Northern Ontario, which is known for it's narrow highways and terrifyingly windy, hilly roads walled in with rock on either side.

I certainly didn't envy them the trip.

I am excited for their new start in a new city though!  Apparently they found a nice house to rent with a yard and everything!  And since everyone loves to receive things in the mail, I thought I'd send them a welcome home gift.  Have you guessed yet what that was?  :D


Yep, I made them a set of dishcloths, like what my Grandma sent me for Christmas!  I have scads of this dishcloth cotton lying around, and it was about time that I started to use it. For those interested, it's the Grandmother's Favourite pattern (Ravelry link).  Of course, mine didn't turn out nearly as uniform as my Grandma's, but I guess perfection is the result of over 70 years of knitting, and I can't touch that yet with my measly 1.5 years.

Still, pretty little dishcloths.  Pair them with a gift card to Canadian Tire and a babbly letter, and I think that makes for a nice Housewarming gift, don't you agree?
Posted by Heather at 12:40 PM 2 comments: