Okay everyone, the vintage pattern giveaway will be drawn TOMORROW (sometime in the afternoon/early evening Central Standard time - because I will be freaking out during the day preparing for my first day of work on Wednesday), so sign up now if you'd like a chance to win some lovely patterns!

As you well know, I've been a little busy sewing clothes for myself. While it may seem a little disjointed at times, I'm actually Sewing With A Plan. I've had this fall/winter wardrobe tentatively worked out for months now, although I've been hesitant to share because I keep changing my mind about things.

Tonight, I decided to lump all of my wardrobe pieces and planned pieces together to see how it all looked. After doing so, I thought maybe I'd share. So far, it's a mix of me-made and RTW. 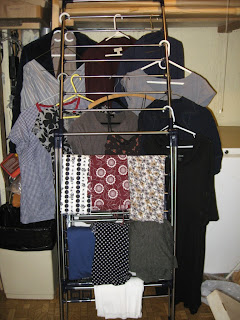 I know it's too small to see details, but details weren't the point - rather the overall impression. I'm generally going for a 'plain bottom, fun and interesting top, plain topper' kind of look. Boring maybe, but easy to toss together when it's too early in the morning to think.

The back row are toppers, mostly cardigans. Three dresses are hung on the right hand side, including my very wrinkly Mariana Trench dress (it's been in a suitcase since June). The rest are tops. Some you've seen, some you haven't, but should eventually. 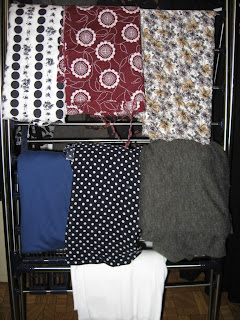 The upper three pieces of fabric, as well as the polka dot in the middle, will be made into variations of the same pattern. That's a post for another day, though. The blue knit on the left will be made up into another New Look 6807, and the white knit on the bottom will probably be a tank top - more of an undershirt, because I can't really pull off white near my face. The grey knit will be made into a cardigan. All of these knits are basically waiting on me working up my nerve to deal with Knit Drama (aka hems) again, although now that I've got a double needle, it may be easier.

My colour scheme is basically shown below, but of course there are variations and some additions. 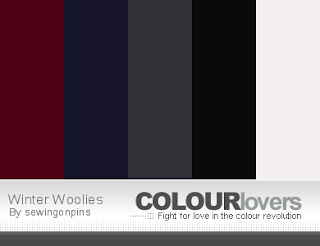 I'm well aware that this palette isn't really on trend, but I don't care. I love the colours, they look good on me (other than white), and they make me happy. For some reason, I'm really drawn to the navy blue/burgundy/grey colours this year.

I didn't include bottoms in the picture, mostly because they're not as much of a priority right now, despite not actually owning a lot of bottoms at the moment. My new job will predominantly involve field work for the next while, and having lovely trousers and pretty skirts aren't really a priority for me. Sadly, jeans and other hard-wearing pants will have to do for now. However, I have plans to get going on muslining a pair of trousers (using Simplicity 2562 - pictured below), since I have a feeling the fit is going to be fun. (Some of you may remember my last sad attempt at trousers, and my body has only gotten...ahem, curvier since then.) For now, I really need to concentrate on tops, because I really don't have much by way of them anymore. 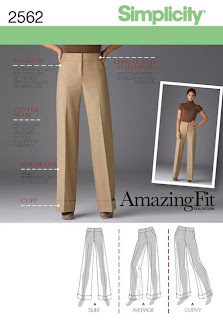 Anywho, sorry for the rambling. I'm mostly thinking out loud (via blogger), and sadly you guys get the brunt of it. But you'll forgive me, right?