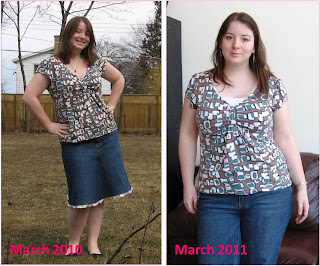 Back in January 2010, I got inspired to really get into sewing my own clothes. Off I went to Fabricland, and hunting through their awesome bargain bin area, I found a whole bunch of fabric. Oh, was I ever inspired! I had so many plans for that fabric! Some of them came to life, some of them utterly failed, and some fabric remains in my fabric stash to this day. 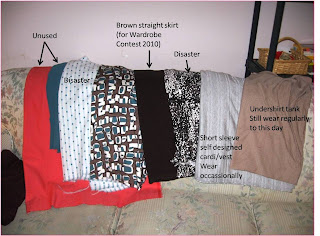 When I saw this fabric knit fabric, I knew right away that I wanted either a top or a dress made out of it. I eventually chose New Look 6940, and dived into the project. It became one of my very first wearable projects. 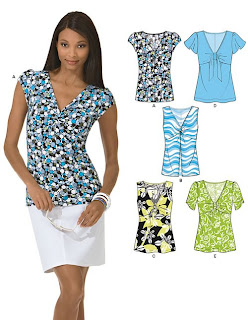 The pattern itself was pretty easy to make, and I don't remember running into any major snags. I made version E but with the cap sleeves from version A. I believe I originally cut a size 14 or 16, but then had to take in the sides drastically. I've since learned that A) New Look patterns, especially knits, tend to fit a little on the big side, and B) I'd been choosing too big of sizes to begin with. I also had some problems with the bias tape facing, and with wear I see why stabilization of the neckline is needed, but I had a hard time understanding the instructions for it back then. I'm sure it'd be a breeze now that I have some experience with sewing from a pattern. Also, I found the neckline to be a little too low cut, but that's another problem I've had in general with tops due to my bust size. Oh, and I think I hacked off 4-6 inches off the length.

But seriously, there are some major problems with this top, all of which were entirely due to my inexperience. 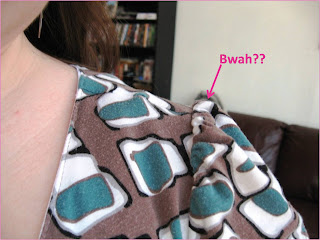 The shoulder cap went poofy, but in a weird narrow way. I don't think it was supposed to be gathered like how I did it, but I didn't know what it meant to ease in a sleeve back then. I think the sleeve was also supposed to be tighter than it turned out to be, and I suspect that's due to cutting it in a too-large size. If I were sewing this now, I'd probably cut the sleeve smaller, ease in the sleeve cap, and iron the seam allowance towards the shoulder to reduce the poof.

Although to be honest, I think the slightly fluttery sleeve is cute! 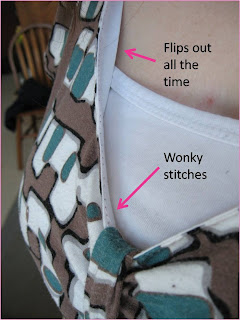 The bias tape used as a facing is just weird, especially since I sewed it a scant 1/8th of an inch from the edge. The darn thing flips out all the time, and I'm constantly fiddling with it. One of these days, I'll fix it by running another parallel seam along the neckline where I should've put the seam originally. Yeah...one of these days... 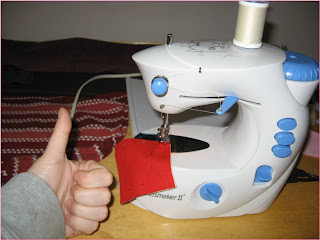 Also, I sewed this entire project on an old Walmart-$20-Special Dressmaker II, my dear old Herbert. The stitches from that machine were never even or tight, and you can see them in all their wonkiness in these pictures. I didn't help that I lazily flipped over the sleeve hem once and sewed. It held up fine until oh about the second wash, and then the hem allowance flopped down. Maybe it would've been alright if I stitched it more than 1/4 inch from the edge, or you know, just sewed a proper hem to begin with. If I were making it today, I'd probably try out a double needle so that the hem has more give and maybe buckle less than a regular straight hem on knit would. 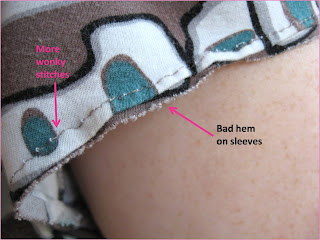 I was less lazy on the bottom hem, but knits are tricky and the hem rolled a bit. I'm constantly fiddling with it, trying to straighten it, to no avail. Now-a-days, I'd be more careful when turning up the hem not to twist the fabric, and once again, probably use a double needle. 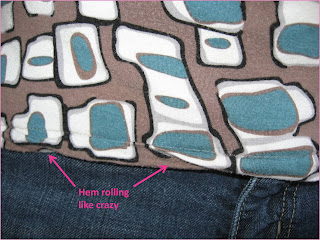 And never mind the fact that the fabric is piling like crazy. Learned a lesson about fashion knits, let me tell you. No dryer for you, my pretties! 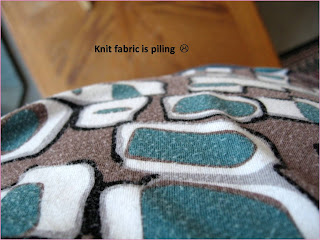 But you know what? I don't care about any of these imperfections. I love this shirt to bits and pieces, and it's rare that a week goes by and the top isn't in the laundry. It's a fun shirt (I mean, come on, look at that print!) and a comfortable design that really flatters the figure. And even with my recent weight gain, I still feel awesome in it! I just tend to layer it, with a cami underneath to cover the cleavage and a cardi on top to hide the horrible sleeves (and keep warm - Hello Manitoba winter!) 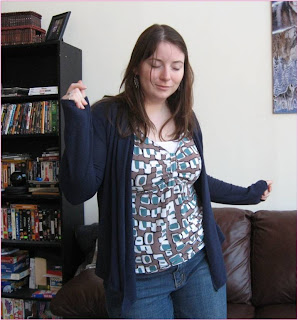 What about you? Do you have a self-stitched shirt or dress or cross-stitch project that is horrifically imperfect but that you adore anyways? Ever revisted a me-made item from your early sewing/crafting days and looked at it with a more experienced eye?

And hey, if you chose to take a look at a piece and then tell us about it in a blog post (or have before), let me know! I'd love to see other people's awesome messes or messy awesomes!
Posted by Heather at 12:26 PM

Email ThisBlogThis!Share to TwitterShare to FacebookShare to Pinterest
Labels: tops