Procrastination, Thy Name is Liberty

I should be knitting the three projects I really need to finish in the next month.  But I'm frustrated by all three projects (especially the toddler sweater I need to restart for the third time. 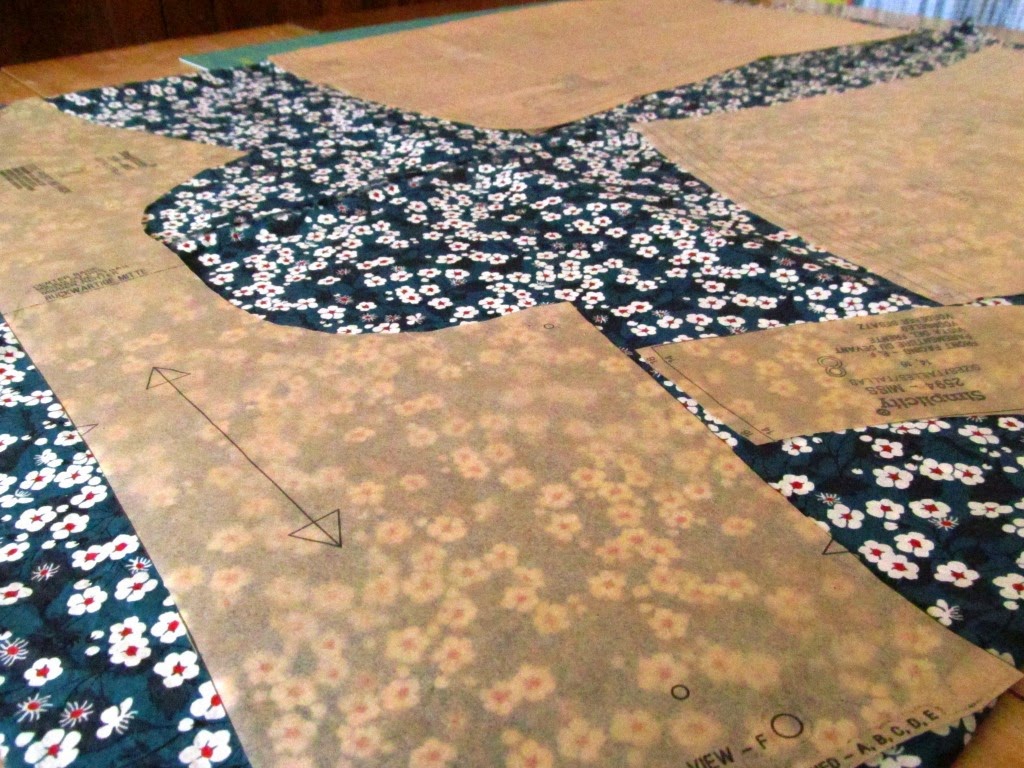 So instead, let's play with some gorgeous Liberty of London fabric I ordered from Hyggeligt Fabrics and a TNT shirt pattern!
Posted by Heather at 1:02 PM 2 comments: 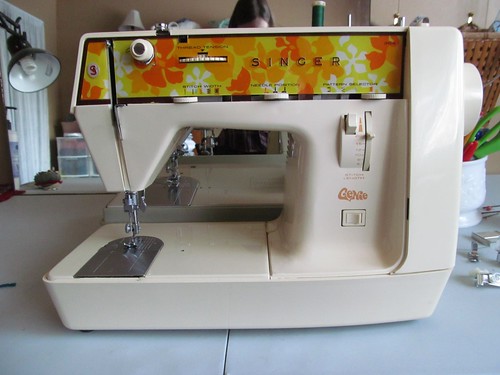 Hello again!  I'm back from camp and have a fun find to share with you all.  Isn't she a beauty!

I found her at a normally ridiculously overpriced consignment shop in town.  The place is packed to the gills with tonnes of overpriced (and often broken) furniture and all sorts of do-dads and treasures.  I literally tripped over one of three sewing machines tucked in the back, and after disregarding the other two, found this little girl! 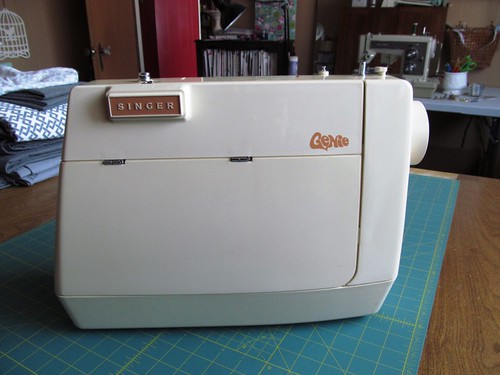 And it not only worked (so far as I could test at the shop without any fabric and thread), but it was only priced at $45!  I had to get her to repeat it because I thought she must've for sure meant $145.  But nope.  I bought it on the spot and brought her home to clean up. 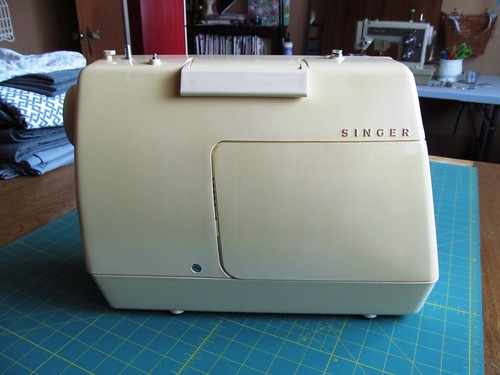 She's a Singer Genie Model 354, made around 1974 in France.  There's been some great write up's on her, in particular Sally Ann's review and even Peter of Male Pattern Boldness, who owned one before he started blogging (see his pic series here).


I'm not ashamed to admit it took me about 10 minutes to figure out how to open her: 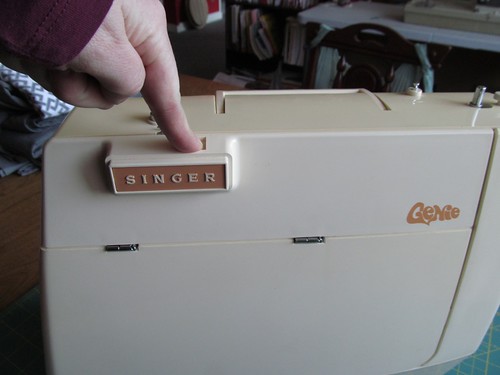 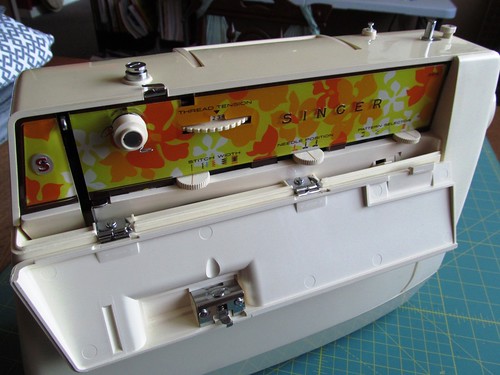 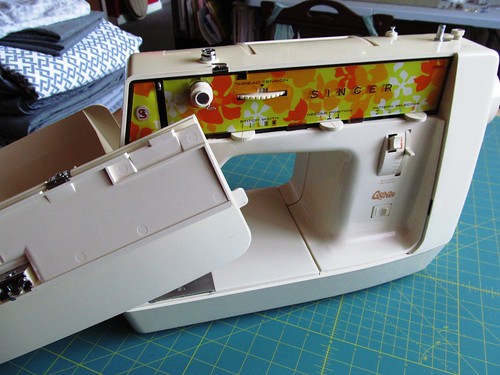 Sneaky!  And even sneakier is where the cable and pedal is hidden: 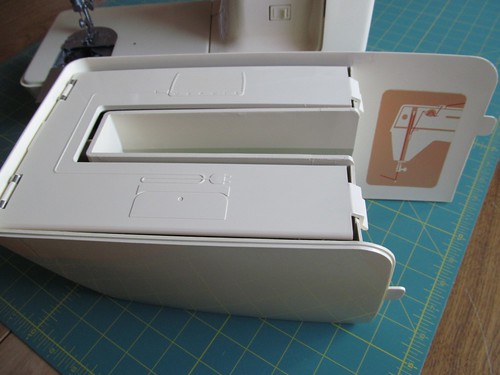 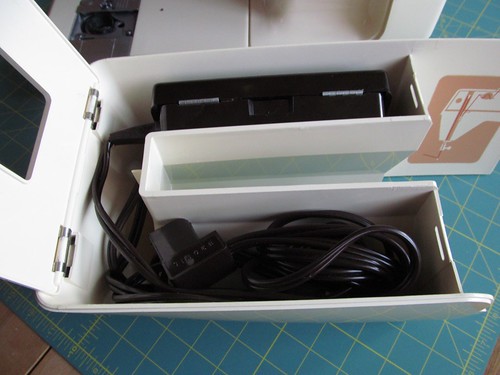 Apparently not a few people have gotten good deals on these because the seller thought the cable was missing! 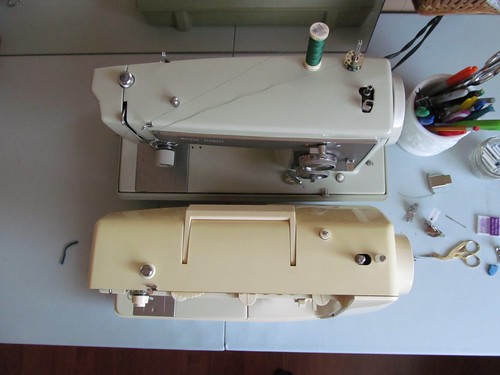 Despite first impressions, she's the same size as Maggie Kenmore!  I really thought she was smaller.  She's definitely lighter, being made of plastic instead of metal.  Definitely more transportable than Maggie.  BTW, I've named her Genie Singer.  I know, bask in my creativity. 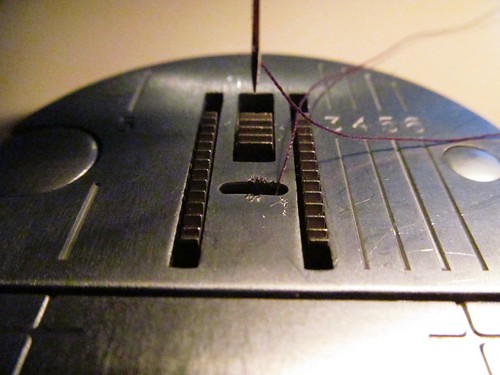 As you can see above, there's a bit of damage on the faceplate itself.  The needle seems to be moving into the slot fine, so I'm not sure how this happened.  I gave Genie a good cleaning and oiling.  She was actually in pretty good shape, a bit of fluff in the feed dogs and a bit of old grease.  Took me less than 10 minutes, and only that because I had to figure out how to remove the faceplate.  And then I realized it's been a really long time since I've cleaned and oiled poor neglected Maggie.  THAT took me nearly an hour, she was in a shameful state.  I apologized profusely to her, but considering that I then immediately put her away to play with Genie, I'm sure she'll never forgive me.  Poor thing. 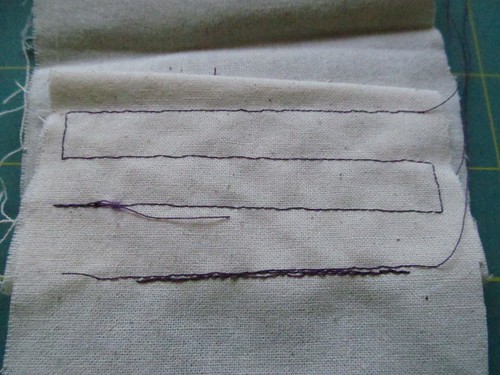 Off the hop, I'm having trouble with straight stitching with Genie.  The stitch lines are looking a little drunk, but I suspect that it's more of a tension issue than anything else.  But what I really wanted to try was all of her zigzag options.  Look at them all: 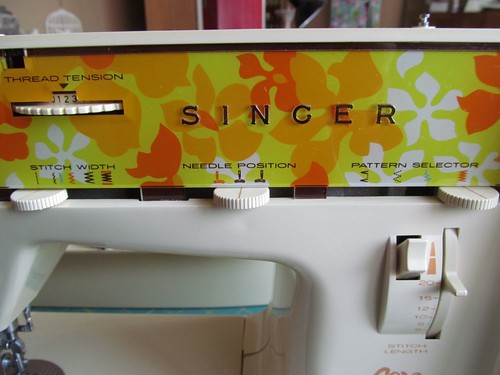 Maggie can only do the standard zigzag (and then do some fancy stitches that Genie can't do, so she's still a few up on Genie).  Genie can do the standard zigzag, a blindstitch, a funky heart monitor-like zigzag which is apparently better for sewing elastic, satin-stitch, and a multi-stitch zigzag - which I've coveted in other machines!  And boy do these stitches look gorgeous (although again, the multi-stitch zigzags look a big drunk because of my wonky straight stitch). 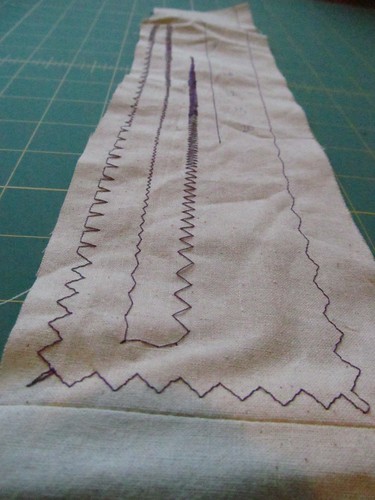 I'm pretty excited about them! 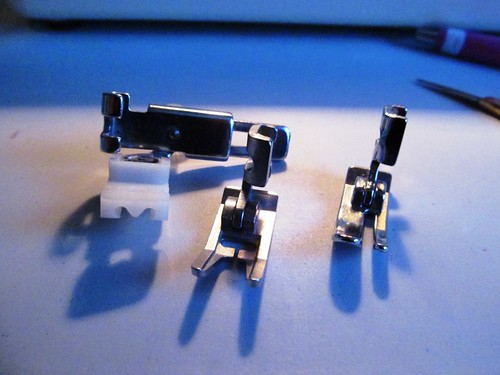 It didn't come with the originally included accessory bag, nor the manual.  Luckily you can either order a paper manual or download a free PDF version of it here at the Singer website.  I'm also really lucky because many of the feet I use most often on Maggie will fit on Genie.  I liked to pick up the lifter piece that allows the faceplate to be raised above the feeddogs for free-motion sewing (the feed dogs on it don't drop down), but honestly, I can do that on Maggie, and I'm happier with her straight stitching. 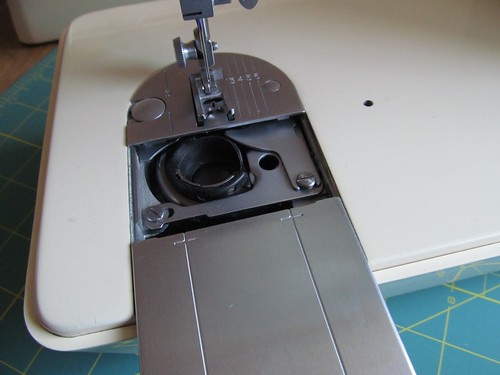 Genie does have a drop-in bobbin set-up and uses smaller plastic bobbins, but luckily I was able to find them at Wally-World, so that's less hassel than I thought it'd be.

Anywho, that was a looong blog post, but I'm pretty stoked about the new addition to my sewing room (if you couldn't tell).  I'm planning on spending the day sewing, so I'm going to get on that.  Two things though:

Oh Look - A Top Completed in One Day. Who'd a Thunk.

Will do a proper post tomorrow once I get some better pics, but I couldn't resist sharing tonight.  SO HAPPY!  Why yes, I did manage to get my Tonic Tee done today!


I absolutely adore it.  It's the perfect t-shirt!  And now I'm going to go try to snuggle with the Neglected Boyfriend.  He's come to bug me 3 times in the last hour, so I think he wants attention.
Posted by Heather at 9:59 PM 5 comments:

One More Top for Sewcation? 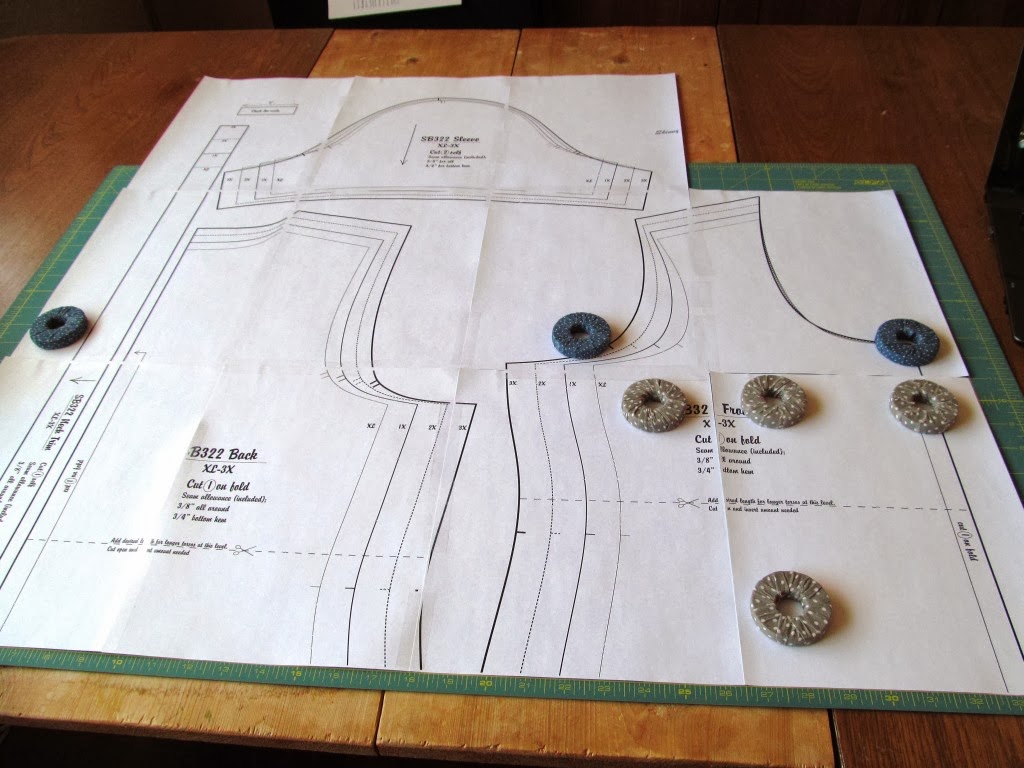 No idea if I'll get this done before I leave for camp on Thursday, but it's worth a shot.  Make up for my horrible showing during my supposively 3 day Sewcation, during which I only got the one top finished.  *sigh*  At least it was a successful garment?

Anyways, I'm piecing together the SBCC Tonic Tee PDF pattern (this one), and I'm already liking it.  All the pages butt up together, instead of having to overlap, and it's making for a much quicker taping job!  Lets see how the rest of it goes.
Posted by Heather at 3:09 PM No comments:


I apparently cut this top out a while ago, but I forgot about it until I was cleaning my sewing room on Friday, and found it all ready to go.  Since it was a perfect top for layering under cardigans (remember? one of the type of garments needed in my wardrobe brainstorm), I thought it'd be a good first project for my Sewcation.

Which took me the whole weekend to finish. *facepalm*

Here's the basics:
Pattern: Simplicity 2594, view E.
Size: I cut size 16, two sizes smaller than my body measurements. This garment has 7 inches of ease.
Fabric: Lightweight 100% polyester I bought who the heck knows when.
Alterations: NO FBA!  So much ease.  It appears that I did draft out some of the drape in the back.  Thanks Past Heather, I appreciate that!


I made up this pattern a couple of years ago, in view B.  I still have that top, and while I do wear it now and then, it's not a go to top because the cowl annoys the living crap outta me.  But I like the loose fit of it, so I guess I thought view E would be a good choice.

I like the loose back, although I'm glad I took out some of the upper back fullness.  Not sure how bad the fabric-eating-armpits really are (stupid camera and it's hatred of all lighting conditions - even the low diffused light like above), but I don't really care.  It's comfortable with a high mobility range.

This pattern has some gorgeous details that I didn't notice as much in my black polkadot version. Like these gorgeous pleats at the front shoulder yoke.

And the back gathers below the yoke.  Which I totally should've put more effort into, but oh well.

I topstitched all of the seams, whether the instructions said to or not, because polyester will not hold a press at all.  Or not in my experience anyways.  The only exception was the neckline.  It's faced with a piece of interfaced self-fabric.  When I went to topstitch, I realized that I love the look of it without the stitches.  Not sure how it's going to hold up long term, but the understitching is holding for now.  We'll see how it handles repeated washings.

I french-seamed the side seams and did a pseudo-rolled hem at the bottom.  For the sleeve openings, I decided to attempt a hand-rolled seam (with visible stitches.  The first one, at the top, looks like crap.  I decided to run a line of machine stitches along one of the turning lines 1/8" from the edge.  Since the fabric is so thin, the stitches pulled too much, creating the horrible crinkling you can see above.  The bottom picture was done without the line of machine stitches, and it looks so much better.  Plus my handstitching improved with the practice.

I spent a very peaceful couple of hours this morning, lounging on the couch handsewing while the Boyfriend kept refilling my coffee.  :)

There's not a lot of shaping to this garment, and I probably should've taken out a bit of width around the waist (yes, even going down two sizes, this was a little too baggy).  But I like the looseness, especially since it's offset by the clingy nature of this very light polyester.

And of course, since this was meant to be a layering top, I'll be hiding all of those pretty details under my cardigans.  Hehe oops.


Well, I may just wear this top on it's own this summer, because it is awfully pretty!  Did I mention that I adore it?  So so comfortable (despite the staticy cling), and so so adorable.  Seriously, I need to find some really lightweight cotton to make some more.  Although I really do want figure out how the lengthen the sleeves without sewing a rectangle to them.  Don't like drop sleeves.
Posted by Heather at 8:54 PM 14 comments:

I declared this weekend a Sewcation, and planned to spend as much time as possible in my sewing room.  I even stocked up on a few bottles of wine!  Sounds like a dream eh, and I've been looking forward to it all week.

SO WHY HAVE I BEEN AVOIDING THE ROOM LIKE IT CONTAINS A FLEET OF ZOMBIES?!  I even have this pretty top all cut out and ready to sew, that's been sitting in the bottom of a basic for who knows how long.

LOOK I'M EVEN DOING IT NOW.  Sitting in my sewing room, blogging instead of sewing.  ARGH GET UR BUTT IN FRONT OF THAT MACHINE MISSY!
Posted by Heather at 6:44 PM 8 comments: