Why rushing is never a good idea

After a week spent with family and thesis (separately, thank goodness), I'm back to sewing. Oh Maggie, dearest, how I have missed thee so!

Anyways, I was working on a pair of pants a couple weeks ago that have now been sent to the I-will-fix-these-later pile, since they're a little bit of a disaster. Silly pants, why can't you be easier?

I knew I needed to alter the pattern right off the hop, so after stalking pattern review for a few hours, I figured out how to accommodate for my generous assets. 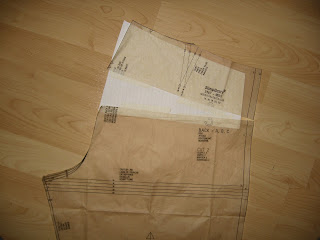 I forgot to take a picture after I slashed the pattern from waist to ankle to add about 1.5 inches of width, but it was done! I'm pretty proud of my Frankenstein adjustments, actually. First time I've done something like this.

I even made a muslin of the pants out of an old sheet I picked up at the local thrift store for this purpose. The back part of the pants turned out pretty good, but the front had some wonky wrinkles. 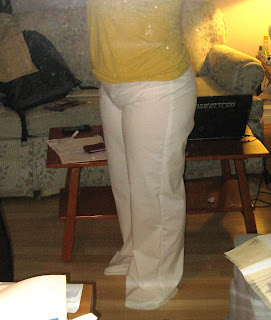 Instead of adjusting the pattern in the front and retrying the muslin, I just figured I'd add a bit to the crotch curve and a tiny bit more width, and just give'r with the good fabric.

Not a good plan. The wrinkles were still there. And since I was in such a rush to get to start on the good material, I even forgot to add the pockets! Although I've since added them, I'm stymied by the front wrinkles, and don't have the patience to deal with them. 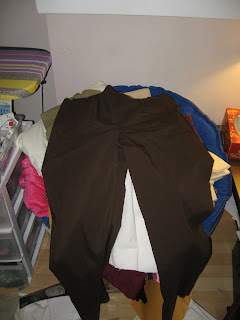 So off to the to-be-fixed-later pile they go.

You'd think that would teach me to slow down and not rush projects. But of course not. Don't be silly!

I started a skirt (view A) yesterday, and got the whole 3 pieces cut out, the back and side seams sewn, and seam allowances zig-zagged in under an hour. Continuing to plow on, I pinned the zipper down and started sewing it on without basting. Who needs to baste! So time consuming and annoying.

I ripped that sucker out and tossed the skirt onto The Pile. At least the pants had some company.

But I pulled it out again tonight, and hand-stitched the zipper on properly while visiting with a friend. 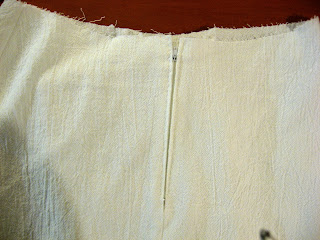 You can sort of see the texture of the fabric. I love texture on fabric! It adds so much dimension without cluttering it up with a print.

I was hoping to finish the skirt tonight, but I still need to pre-wash the cotton liner material, and I can't finish sewing the zipper nor attach the waistband if the liner isn't ready. :(

But! It's looking so good so far, I'm glad I went with the white fabric, even if I'll be terrified of sitting anywhere. 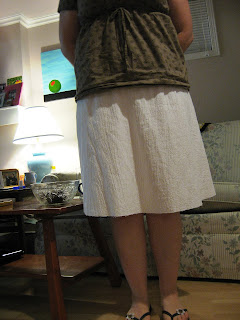 Hmmm...my apartment appears to be tilted. Must be due to the earthquake that rolled through here last week!
Posted by Heather at 10:11 PM No comments:

The last week or two, I've been sewing merrily away, working on several pieces for the Wardrobe Contest over at PR. Despite this, I feel like I've gone two steps forward, two steps back.

Well, maybe only one step back.

You see, I found out about the contest on the day it officially started, June 1, and was so excited about it, I ran off to the fabric store like the little eager seamstress that I am to buy up lots of fabric. Drawing inspiration from the pretty brown print below, found enough fabric for about half the wardrobe. 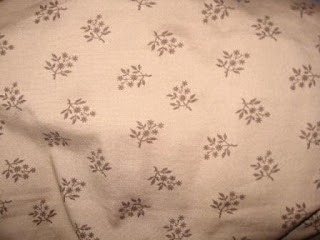 I then came home and, combining the new fabric with some I had around, came up with this storyboard (which I've posted before). 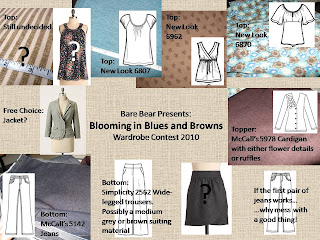 Except, I wasn't that happy with it. In fact, I was getting more and more frustrated with the colour pallet I'd chosen. I couldn't seem to find anything else that would work with it for the skirt, pants and jacket except dark brown, and the whole thing was just so...depressing. Oh, it's a pretty storyboard, I know, but it just bored me.

And then I realized the problem. I really don't like blue. Oh, it's a pretty colour, and I'll never wear any other colour jeans than dark blue denims, but I don't like the colour any where else in my wardrobe. And in addition, I don't wear that much brown anymore, either. In fact, I was starting to lean towards more jewel tones and dark greys.

So I tootled off to the fabric store again this past Friday (those lady almost know me by name now) and finally threw out my already-purchased fabric swatches and started again.

I'm still using some of the fabrics I'd chosen, but I picked up some other colours and better fabrics. There's still a lot of brown, but I think I'm alright with that, and the whole wardrobe plan is far more balanced than it was. And I'm sticking with the blooming theme, so yay flowers! 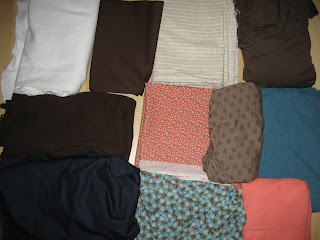 And the funny thing is, that fabric that I originally based this all on? Even though I've already sewn it into a top, I don't think I'll be using it in the contest. 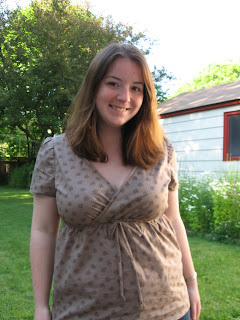 It's a toss-up between it and the blue floral print, which is the only other piece I have finished at this time. 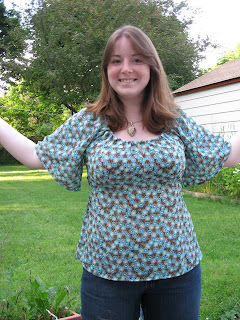 It's a lovely shirt and fits really well, but I've learned an important lesson with this one. While 100% polyester fabric flows really nicely, it sucks for breathability.

So basically, to sum up my contest status, I'm pretty much back to the drawing board with one piece finished and a whole lot of work ahead of me.

Well, kind of. I started tackling the brown cotton blend pants (Simplicity 2367 view A) yesterday. I even made a muslin of it, making yesterday not only the very first time I've tried to make pants, but also my very first muslin!

But these have been a trial all on their own, so I think I'll save that for another post. Hopefully soon I'll have a proper mock-up of my new storyboard, and once I do, I'll for sure be posting it here.

I just have to think about it some more, a little more thoroughly than I did last time. :)

But do you know the one good thing about creating a wardrobe from a colour pallet you don't normally use? You've got to go buy new shoes to go with it all! 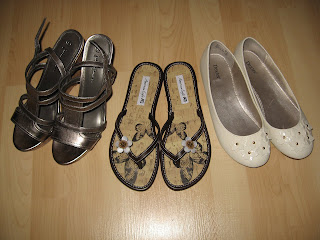 An Introduction and Tour

I had every intention to post on the two tops I've sewn for the Wardrobe Contest, but I find myself completely unmotivated to do so today.

Instead, I thought I'd give a tour of my sewing "room".

See, I live in a small, open-ish concept basement apartment that consists of one long room containing the (lavender) kitchen and living room, a (sage green) bedroom (with no door) off the living room, and a (salmon pink) bathroom off the bedroom.

Definitely constructed for one single person, of the female variety. Having house guests is...awkward.

Considering the lack of size and storage in the apartment, of course I took up a hobby that requires much more space than I currently have. But one makes do.

First of all, introductions are in order. This is my lovely Kenmore, Maggie. 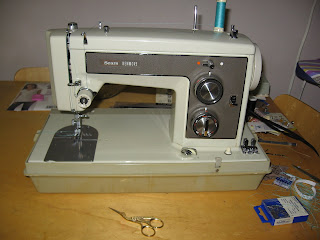 Isn't she a lovely old doll? I found her on kijiji, and someday she will have a room all to herself. For now, she must settle for my kitchen table. 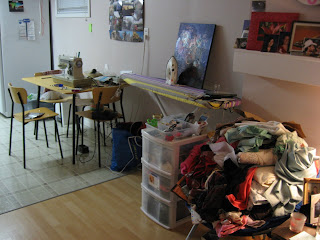 This is the entirety of my sewing room, which basically consists of a fabric storage chair, a plastic drawer thingy, and an ironing board shoved against the wall. And of course, my sewing/kitchen table.

As you can see, my fabric stash is very well organized. 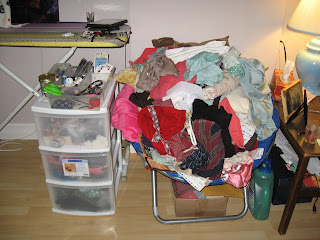 Actually, I just straighten this up. Half of that pile of wrinkly fabric and failed projects used to reside underneath the chair. Someday I'll clean it up more and fold things neatly. But for now, I'll keep digging around until I find what I need.

Although I spy a skirt that I recall pinning the hem, but never sewing. Oh boy, that adds an element of danger to these fabric expeditions.

Finally, here is the little corner of my bookshelf dedicated to sewing books and patterns. 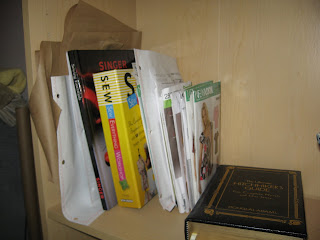 I've also just cleaned this up, as before it was spread all over my floor with 3 or 4 patterns cut out and all mixed up. I'm sure next time I try to sew one of these patterns, I'll have the front of one pattern top, and the back of another cut out before I realize the issue.

Why yes, that is a leather-bound, gold-leaf copy of the Hitchhikers Guide to the Galaxy. :D

AND, that's the entirety of it. Stellar, eh? But I hope you enjoyed my little tour. I'm always jealous of other peoples nicely organized, dedicated sewing rooms, so perhaps this will make other poor, cramped sewers feel better about their sewing space (however small it is)!

What better way to start off my brand spanking new blog on my sewing obsession than by posting about a wardrobe contest I've recently entered!

The Wardrobe Contest is hosted by Pattern Review, and the gist of it is that you have to sew 4 tops, 4 bottoms, 1 topper (cardigan, jacket, etc.), and 1 item of your choice, all of which coordinates together. The contest ends September 1, which, incidentally corresponds with Self-Stitched September, which I'm also planning on joining!

As you can see, it's not quite complete yet! But that will help with my tendency to be a little spontaneous with my sewing projects.

I've already made one of the tops, and a muslin for another, but I'll post about those later.

Anyways, welcome to Sewing on Pins (SOP?), and I hope you enjoy my posts!
Posted by Heather at 6:36 PM No comments: