Just a quick, no photo update this week. I'm not sure when the next one will be since I'm under some major deadlines in the coming weeks, but I'm sure I'll break down and do some sewing soon.

I already made the first muslin of the Simplicity 2254 top. It uh...needs some work. It pretty much turned out how I predicted it would at the end of the FBA alteration post. I think I need to move some darts around, and cut a smaller size on the skirt part. I'll try to get some photos up next week and get your input (if I can ever find my camera, that is).

Now if only the thesis would stop interfering with my sewing!
Posted by Heather at 3:43 PM No comments:

Email ThisBlogThis!Share to TwitterShare to FacebookShare to Pinterest
Labels: thesis is infringing on my sewing time 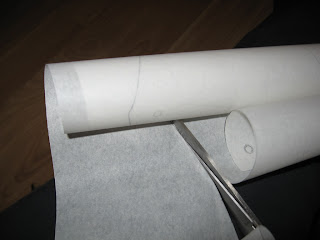 First of all, I need to tell you that using parchment paper for pattern tracing is a giant pain in the rear. I really don't like how much it curls, especially when cutting the darn thing.

Now that that's out of my system, let's recap where we stood last time with the FBA on the Simplicity 2254 top:
Last night, I finished my very first FBA alteration! I'm ridiculously proud and hoping that I did it right. I did run into a few snags, though. The very first one was when I went to do cut 3 (cut 2 on Patty's (from The Snug Bug) guide), which has you cut from the bust apex to approximately 1/3rd along the armscye. Unfortunately, there's no armscye on a kimono sleeved top, so I had to jury rig something up.

I initially considered just cutting the line from the apex to 1/3rd along cut 1 (as shown by the solid line in the second photo below), but it didn't look anything like Patty's. So I took a closer look at her photos. In Patty's picture below (let me know if you'd prefer me not using it Patty), I drew a line from shoulder to the side seam, simulating my patterns bodice. Projecting her cut along this line, you can see that cut 3 should be about half-way along cut 1. I think this looks a little better! 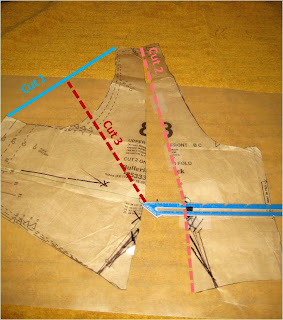 Photo credit to Patty at The Snug Bug 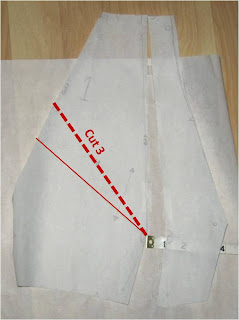 When cutting this line, don't forget to leave a little bit of the paper near the arm hole to act as a hinge (I remembered this time)! I swung this part out until there was a total of 2 inch gap near the apex of the bust (shown below). This will give me the 4 inches needed for the FBA! 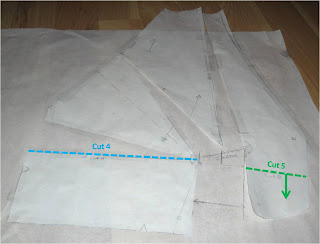 Now that we have the added width needed for the FBA, we just have to adjust the rest of the bodice to add the necessary darts. Cut 4 will create the horizontal dart from the side seam to the bust apex, and have the added bonus of finishing off the vertical dart below the apex. Patty said to put the slice anywhere along the side seam. I chose a spot just below where the side joins the sleeve (when it's attached, that is). Cut along this line from the side seam to the apex (don't forget the hinge!), and swing the bottom piece down until the edges on the inside are parallel and the same distance as you FBA adjustment (my is 2 inches).

The next cut (#5) will even up the bottom of the bodice, and simply involved cutting a horizontal line and dropping it until it's level with the bodice bottom on the left. According to Patty, this added length is needed to get around your bust, don't fret about the length! 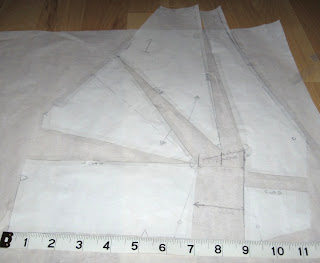 At this point, I taped down all the edges to the parchment paper below it. I had to use a lot of tape because it wasn't holding down that well. If I'm going to use parchment paper more often for tracing paper, I'm going to have to experiment with different types of tape. Next time, I'm trying duct tape.

My next step was to draw on points around the base of the darts and find the points of them. I sort of guestimated were the apex would be on here (and I'm betting there's a better way, or maybe this is something you learn with time and experience), and then guestimated again where the dart points should go. This basically involved a lot of poking around in front of a mirror and my cousin laughing at me. 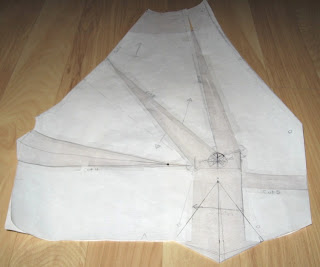 Doesn't it look great! Well, actually, I think it looks like the instructions for some funky origami project, but I suppose that's what it's supposed to look like, and pretty appropriate.

I was going to simply re-affix the sleeve to this pattern piece, but I just don't trust the tape. So I simply traced out the pattern on a fresh piece of parchment (adding a bit of length where the sleeve attaches), cut it out, and attached the sleeve. It looks pretty good, I think. I tried to draw on the grainline on the pattern, but because of all the slashing, I'm not certain if it's right, and I'll have to play with adjustment when making my first muslin. 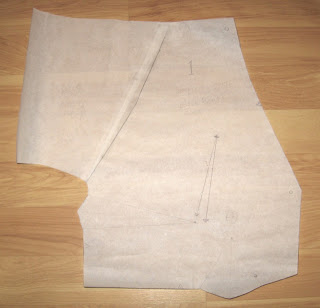 If any of you have any suggestions of where to put the grainline after a FBA, I'd appreciate any advice!

I hope I did this right. I tried doing a tissue fit, but this paper was too stiff, so I gave up. I intend to make a muslin anyways, so I suppose I'll find out then. I don't have any pictures of the tissue fit, but it looked something like this: 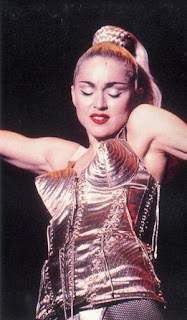 Photo credit to www.sandrascloset.com
Next step: make a muslin. Sadly, I'm back out in the boonies, so I'm out of unlimited internet access. But that just means you'll get a more complete post, rather than one post broken up into two (or more!)

Oh my gosh, an actual sewing project! We haven't seen one of them in a dog's year around here, holy man.

And I'm giddy enough about this that I want to post tonight's progress, such as it is, although I'm torn about posting this now and waiting until I at least finish the fba. But I'm too excited, so here's part one. I've babbled about this project before, but I'm planning to sew two versions of Simplicity 2254 (which, of course, has never been reviewed on PR, but there's always got to be a first, and this pattern seems to be full of them, for me.) 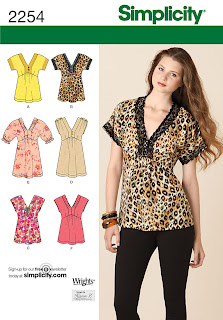 For example, I’m trying to do my very first FBA, and for added fun, this top has kimono sleeves. I've been stalking blogs and the PR forum all evening trying to find advice and 'how tos', but this is extra difficult because most FBAs includes a slice into the armhole, and there’s no armhole here (not like they describe, anyways). However, I stalked the PR message board until I found a post titled kimono sleeve fba (couldn't be more perfect, eh?) 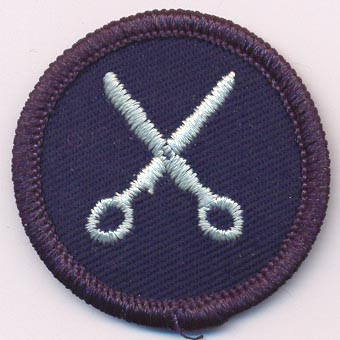 As a person who sews, what do you call yourself?
I've always called myself a "sewer", as in someone who sews. But when I Googled "sewer", this is what I got: 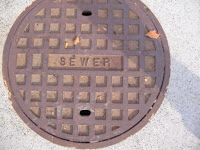 There goes that term.  I'd never made that connection before, and it's certainly not the badge I'd want to earn. But what to call myself? According to wisegeek, a seamstress is a woman who makes her living by sewing. This means that she has the skills to make her living doing this, an implication that is just not true for me (as yet).

Plus if I called myself a seamstress, people will assume that I am willing and able to mend any garment they throw at me.  Although maybe I just need to take a page from the Selfish Seamstress and JUST SAY NO!

So what does that leave us? I've heard the term "seamster" thrown around lately, and when I googled it, I got the impression this is the "hip" new term for a new generation of (not sewers) people who sew. There's even an online magazine, Modern Seamster, that is targeted at this group and contains everything from sewing tips to embroidered naked people, and even a how-to on self tattooing. A little out there, but fun to read!

But am I "hip" enough to be a seamster? Probably not if I have to ask, and especially if I keep putting 'hip' in quotation marks.

So what do you refer to yourself as? A seamstress? A seamster? Any other term I haven't heard of yet? All I know is that I won't be calling myself a 'sewer' anymore!

ETA: The lovely and talented knitsnwovens (go check out her blog; she's got some beautiful projects in both sewing and knitting/crocheting, and I'd really like to steal one of those toques for the cold weather we've been having lately) recommended the term "sewist", and I love it!  Much better than "sewer", eh?

Sadly, despite having a project all ready to start, I haven’t been able to do any sewing. That's because I am now in another Manitoba town, far away from my sewing machine. But that’s alright, it just gives me a chance to pick up more supplies!

Especially since pretty much the entirety of my sewing supplies are still in southern Ontario. 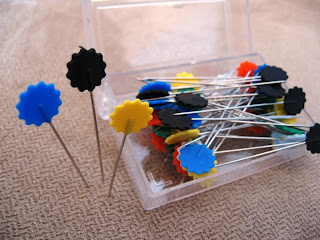 First off, I checked out this cute little fabric store located on Main Street. While I didn’t get any fabric (as if I need any more potential projects to distract me from thesis writing), I did pick up some supplies, including fabric chalk, pins, bias tape, rivets and piping (for one of the tops mentioned here), and a few other do-dads.

After the fabric store, I checked out the local thrift store, and boy oh boy, did I hit the jackpot! Never mind the adorable denim trousers and casual dress jacket in exactly my size, this place had a beautifully organized sewing section. They had tonnes of fabric and notions! Guess that’s the bonus of hitting a thrift store in a strong Mennonite community. 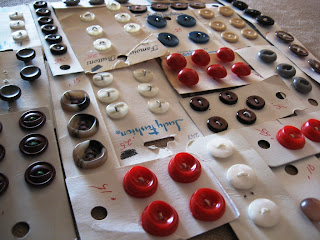 I picked up a whole whack of pretty (and some pretty ugly) buttons, as well as two large pieces of fabric. So much for not distracting myself with more projects. 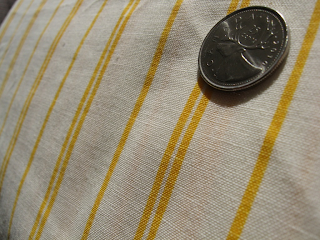 The white and yellow striped fabric is actually a large cotton/poly blend top sheet (in excellent condition), and I sort of want to make a shirt-dress with it. It’d have to be lined, of course, but I think it’d look really lovely. The other fabric is a woven shirting-weight fabric of mysterious origin, and I have no idea what I’ll do with it yet. 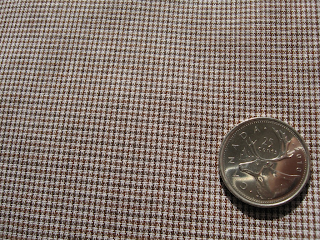 Sure is lovely, though. Possibly a blouse? A light-weight skirt? I may even have enough of it to make a dress!

Oh, and I found this really ugly (but with great potential!) shirt dress pattern. It’s very obviously from the early ‘90s, but I like the fuller skirt on it. I’m torn between making up this pattern (view C, with alterations to modernize it a bit), or picking up McCall’s 4769. Hmm… Any thoughts? Maybe alterations at this scale is a little too much for me, and PR has many adorable reviews of the pattern. Sadly, there is none for this vintage(?) pattern. Eh, we'll see. 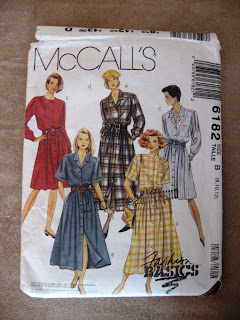 Thifting is pretty awesome in my books, mostly because I'm cheap (I'm from the Canadian prairies, we're sort of known for it), but also because I believe in reusing rather than wasting resources on new (usually inferior or disposable) products.

Do you thrift shop for clothes or sewing supplies? Or do you prefer to only use new fabric/supplies/clothes? Any particular reason why?