This weekend is the Yukon Sourdough Rendevous, and boy do Yukoners know how to party!  I'm not really surprised by this after 8 months living here, but it's always a fun lesson to relearn.

So a friend and I went to the Mascarade party on Friday night, and I found out on Thursday night that I needed to dress up for this.  Not just a pretty dress, but in costume, in typical Klondike-era garb.  After digging around on google and pinterest, I worked out a relatively simple design for a 19th century dress.  Oh, I had so much inspiration, so many ideas, so much motivation!

Eh, it didn't work out.  The skirt was so unflattering, my camera refused point blank to take a picture of me wearing it. In hindsight (considering my inclination to post pictures no matter how bad they look), that was probably kind of it. 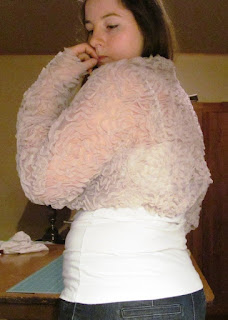 I did, however, manage to finish the bolero!  I love this lace.  Molly sent it to me after one of her giveaway's back in November, and I've been trying to figure out what to do with it ever since.  It wasn't that large, just a narrow piece cut along one salvage.  When I pulled it out of the cupboard on Thursday, I realized it was just long enough to be a long-sleeved bolero, and then I was off.

I unfortunately didn't take any pictures during the construction, but it was easy to do.  [WARNING: ATTEMPT AT DESCRIBING THE PROCESS AHEAD. PROCEED AT YOUR OWN RISK]  I trimmed up the bottom cut edge to even it up.  Then I simply drapped the piece over my shoulders and played around with some pins until I got the top and the bottom edges lined up to my likings.  Since the lower edge went across my back and the upper edge had to curve from my sides and around my neck, the upper edge needed to be longer than the lower edge.  When laid flat on my table, this created a natural taper from the body to the wrist.  I pinned down this taper, evened up both sleeves, (carefully) tried it on, then sewed down the sleeves using a zigzag stitch.  After a quick trim around the wrist, my frothy little bolero was done! 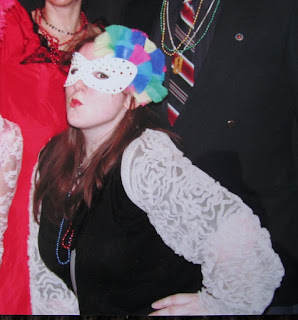 Sadly, this and the picture above are the only shots I have of it right now.  But I adore this bolero and will be wearing it again, so I'll try to get some better pictures of it later (it's currently at my friend's place along with the rest of my outfit from the party). 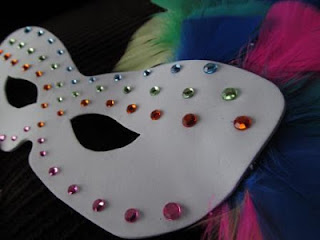 And of course, since it was Mardi Gras themed, I had to make myself a mask!  Actually, I made two, but one died tragically in an incident I really don't want to talk about.  This one was thrown together last minute, but I actually like it better than the first! 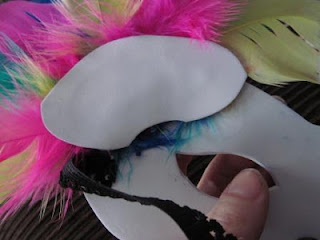 It's basically just a piece of craft foam, cut to size, with a bunch of gems stuck on it in a pretty pattern.  The feather plume was originally glued-on-and-then-ripped-off of the original mask.  I'm glad I had the forethought to glue a piece of foam to the back of the plume, because cripes did those feathers get dye all over everything they touched, and I danced and sweated like crazy in this thing.  No multicoloured forehead for me!

The party was only one event in this weekend-long festival; there were all sorts of fun events on!  My personal favourites were the chainsaw chucking contest, the one-dog pull (where a dog was harnessed to a sleigh loaded with hundreds of pounds of dogfood, and the dog who pulled it the fastest won), the hockey tournament (which my boyfriend's team won!), and the maple taffy.  Okay, so the maple taffy is a long-standing tradition at Rendevous, where a bunch of french geniuses prepared the hot taffy while everyone stands around drooling, and then pours strips of it on a snow-covered table to cool.  The taffy is then rolled onto a stick and you fight the crowds to get your paws on the sticky, gooey icy-warm treat.  And if you're me, you proceed to get it in your hair and all over your phone (but it's totally worth it).

So all in all, it was a fantastic weekend, and I'm glad I was in town for the festival!  The only down side is the resulting state of my sewing room: 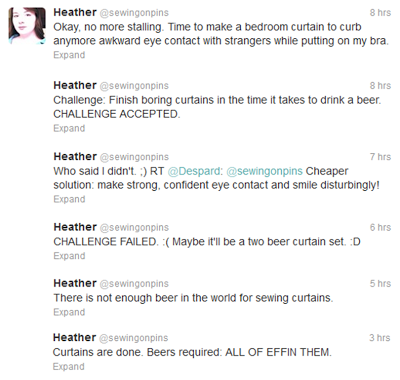 Long time no see, dear readers!  (Again.)  Sorry about the disappearance, not only did I lose my sewjo, but also my blogjo (did I take that too far? OH WELL).  I have something special planned in a couple weeks for you all as a thank you for not abandoning me! 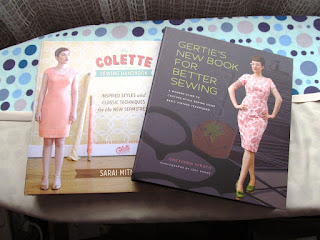 Anywho, I've been sitting on this post for a while.  At Christmas, I received a Chapter's gift card, and I knew right away that I had to buy the Colette Sewing Handbook and Gertie's New Book for Better Sewing.  And I was not disappointed.


I'm not going to review these books for two reasons: 1) I'm not actually finished reading through them (although I've flicked through and admired the handsome pictures and sketches in both, especially Gerties), and 2) better and more well spoken people than me have already done fabulous and thorough reviews.


Not sure if I'm really keen to make any of the garments from either book since the styles are so different than my own, but these will make excellent reference books.  The amount of information that Gertie packs in about fit, alteration, and redesigning to make the garment your own are great, and the sewing methods and techniques she describes are going to up my sewing skills, I know it.  I'm not as far into Sarai's book to know exactly how this book is going to benefit me, but I've enjoyed the bits I've read while flicking through.

Of course, I say that I'm not going to make anything from these books, but there are two garments that I sort of desperately want in my wardrobe:

I really only have one comparison to make between the two books (because I find that they are different enough to stand up on their own), and that's in the physical books themselves.  While they're both spiral bound hard covers, with lovely pages and great colours, I sort of prefer the Colette book set up a bit better.  Every time I open Gertie's book, I struggle with the pattern envelope at the front.  It makes closing the book a pain, and the envelope has already fallen out.  I don't want to keep it separated from the book because that's how I lost the pattern envelope from another book, but I think I'm going to have to.  In the Colette book, it stays tidily in the back and doesn't effect the use of the book. 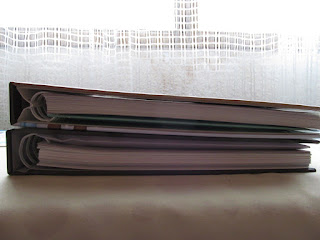 Just food for thought for anyone looking to write their own book!  :D

And now I'm off to do some sewing. I'm excited to get back to my Tiramisu dress, but a set of sorely needed curtains for our bedroom is first up on the docket (it's what the books are sitting on in the pictures above).  I'd leave it for after the Tira, but I'm pretty sure the neighbours and all the people who walk the trail beside the house would prefer me to stop flashing them. Or you know, not (but I should anyways).  As it is, making eye contact with a stranger while putting on your bra is awkward, so curtains it is!
Posted by Heather at 5:09 PM 2 comments: