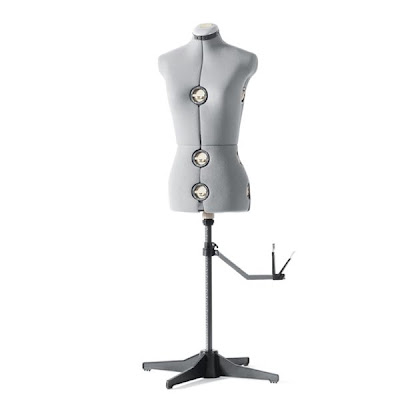 Look at what I got for Christmas!!! From the Grandma that I named the last dress form after and whom I gave the sewing room shadow box to.

This is all not helping me focus on thesis writing at all.
Posted by Heather at 12:12 AM 3 comments:

Email ThisBlogThis!Share to TwitterShare to FacebookShare to Pinterest
Labels: supplies 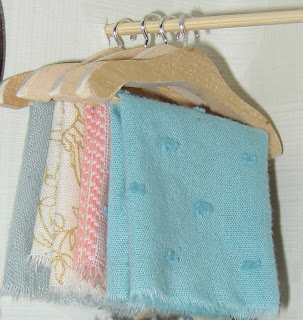 Hello all you lovely readers! Hopefully you're not still stuffed from all the holiday eating that we indulge in at this time of the year. I don't know about you guys, but I've already had it with turkey leftover creations. But the shortbread cookies will never get old!

As promised in the previous post, here are the adorable little gifts I made! Well, gift IOUs, I suppose. It all started with the fact that I am a grad student who hasn't received funding since October and am in the throes of writing a thesis, thus have no time to make my usual gifts. So for anything more costly than, say, a Christmas hug and hello, I'd planned to do little IOUs. My Mom suggested it, actually, since she'd like me to make her curtains once I'm finished my thesis. And then a good friend of ours, Laura, said she'd like the same. It sort of snow-balled from there.

But writing an IOU on a card is lame and boring. My favourite part of Christmas (besides spending time with family) is seeing someone's face when they unwrap a present I've spent time on, and a card wasn't gonna cut it. So I started with these curtains. 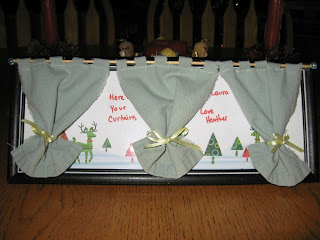 Aren't they cute? I pretty much just tore up an old shirt into strips, folded the top edge over and hand-stitched, cut out notches to represent loops, then slid a wood skewer through the loops and hot glued it to a picture frame. Tied some ribbon to gather the curtains, added some paper to the frame, and voila, a fun little IOU that made her smile!

The mini-curtains got me thinking of other fun ways I could present my IOUs. Laura's husband, Cyril, had asked for another pair of very large pajama pants for Christmas, similar to the pair I bought him last year accidentally (apparently super big pj pants are more comfy). Figuring I'd make him a pair later on, I thought it'd be hilarious to make him a tiny pair for Christmas. 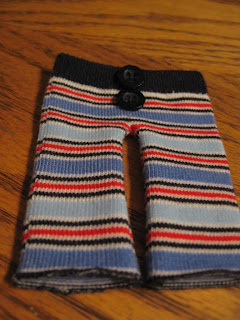 One sock from a child's pair, scissors, needle and thread, a couple buttons, and about 10 minutes of time produced these adorable little pajamas! 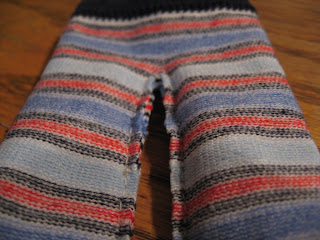 I didn't even have to sew the waist-band, the cuff of the socks was perfect! 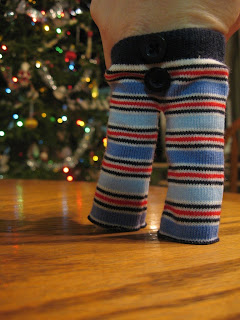 Seriously, I played with these things all evening. They'd make great doll pants! Or finger warmers. Cyril got a kick outta them.

At this point, I decided I wanted to make pajama pants (both tiny and full sized) for both my Grandma and Great Aunt. Lounging around on weekends or holidays in pajamas is a given in my family, and my Great Aunt especially always has the most funky pajama pants. So another pair of fuzzy socks produced two more pairs of tiny pajamas. 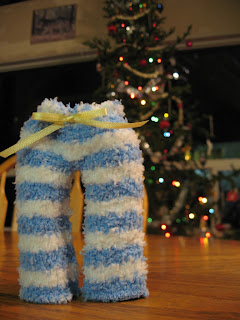 This time I sewed a ribbon around the waist to bring in the waist a bit. Okay, so they're a little hippy and bow-legged, but man do they look comfy, eh? 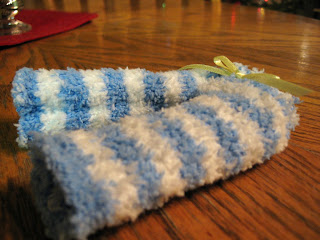 For my Great Aunt, I simply wrapped up the tiny-pants with a letter saying (I'm paraphrasing, here) that I'd made these pajamas for her, but I think they're a little too small. So I'm going to come down one weekend with some fabric and Maggie Kenmore, and make her a pair that fits and spend the weekend with her. Because the gift really isn't so much the pants, but a weekend hanging out together after I've been away for 2 years.

She really liked it.

I was planning the same gift for my Grandma, but I wanted to be a little more creative with the wrapping. See, she used to always give the most interesting presents, not so much for the gift itself but for the way she'd wrap them. Sometimes she'd write and illustrate a giant book about an adventure you had to go on to find your gift, or you'd have to work for it by earning your gift through some game show she'd make up. While she hasn't done that sort of thing in years, she always has the prettiest wrapped gifts under the tree.

Just like an IOU card, a box with the pants wasn't gonna cut it.

So digging through my craft supplies (that my poor Mom has been storing for me for ages), I made a shadow box sewing room. 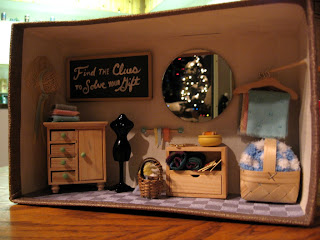 Hidden all over the room were clues that she had to find and solve to figure out what her gift was. 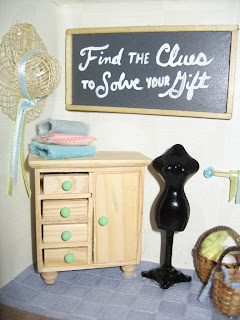 I am ridiculously proud of this. Amazingly, I had all the supplies - the shelves, dress-form, baskets, wee patterns and scissors, hangers, mirror, chalk board, everything - in my craft stuff. I just took a shoe box and lined it in wallpaper from an old sample book my Mom brought home from work, then hot-glued everything into place. 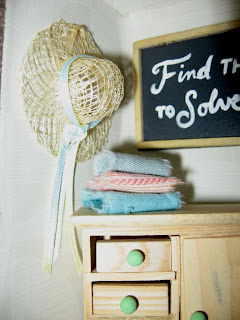 I also made sure to stick little personal touches in it, like the hat above, since Grandma loves big hats, and the roll of ribbons, since I first saw that idea in her own craft room.

The drawers in the cabinet above pull out, and I drew on one clue on the bottom of the shelves. 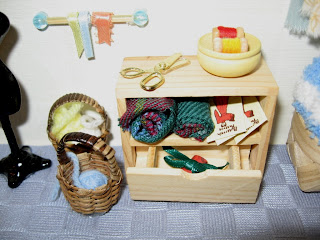 Three of the five clues were in this little shelf. The roll of paper with the green ribbon in the drawer was one; one of the Butterick patterns had a clue (the other two were glued down); the last was rolled up in one of the fabric rolls. Actually, I was really proud of that last clue. My family adopted that tartan (the Manitoba tartan) as our own, and the clue was the first line of our family motto - "To Get Together" (the rest is "To Love One Another, To Care For Each Other"). 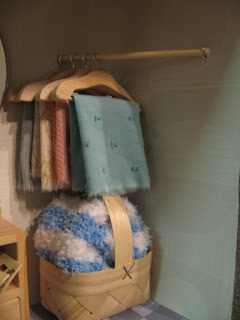 The last clue was the pajama pants, rolled up in this basket. I loved the fabric pieces hung up on those hangers! 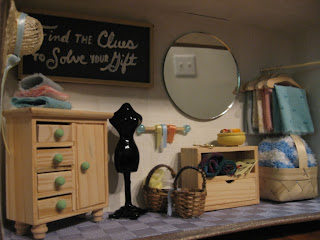 Grandma love it, and I'm glad to say that it took her longer to solve than I expected!

Sadly, I didn't have the time to get creative with the rest of my gifts. My other Grandma (the one the sewing machine is named after, actually) requested no gifts but my presence at our Boxing Day get together, so along with my presence, I exploited her chocoholic affliction with some nice chocolate bars and included an invitation to lunch sometime in the future, just her and I.

When you love giving homemade gifts, being broke and short on time kind of sucks. But after 2 years away from my family, I don't think I'd change these gifts even if I had all the money in the world. Because I think what I, and hopefully they, want and need the most is just time spent together.

I hope you all had a fabulous Christmas (or whatever you do or don't celebrate!), and that you were lucky enough to be able to spend it with people that you love! 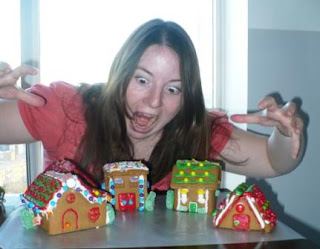 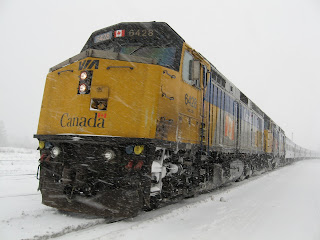 I know I've been radio silent the last while, but I've been swamped with thesis and moving stress. Well, I made it home to Small Town, Manitoba, on the beast shown above. YAY SNOW!