Oh goodness, I have the WIP bug.  NOT the UFO bug, these projects are still ongoing.  But I seem to have a tough time finishing something before moving onto another project.  Instead of waiting until they're finished and never posting anything, I figured I'd share the projects (and maybe get a handle on where I'm at with them).  Oh, and it's not all knitting!  There's a sewing project in there too! 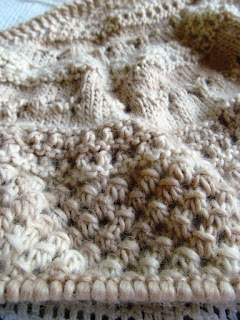 This here is my longest WIP (so far).  It's a pretty shawl called Summer Flies, and I suspect that I knit it far too tight.  I only have one last section to go, and I'm only just now starting the second ball of yarn (and I was supposed to use them both up).  Plus it looks like it'll barely cover my shoulders.  But I'm praying to the Blocking Goddess that it'll block larger, so keep your fingers crossed for me! 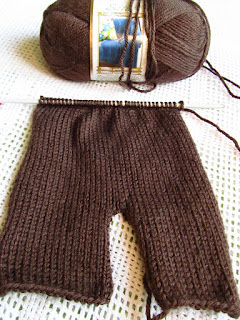 This is nearly done, and barely took any time to do.  It's a doll (minus the head and arms) knit flat to be stitched up the back and stuffed.  I keep forgetting to pick up stuffing, hense why this has stalled.  A couple weeks ago, a woman in the States put out a call for donations of knitted/crocheted/sewn/whatever child-sized picc line covers and medical play dolls for a Children’s Rehab Centre in Washington, DC, where a friend of hers works as a Recreation Therapist.  I'll let you go read about it over on her dreamwidth account, since she explains it better than I can, but I'm making up a couple dolls to send along, and will probably do more after Christmas.

I just have to finish the blasted things. 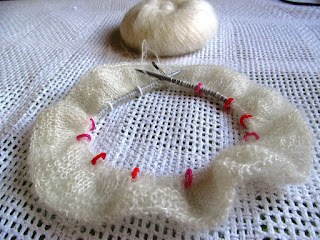 I think I mentioned it before, but I'm making up all of my Christmas gifts this year.  Or at least, I hope to!  I'm ambitious like that.  This fuzzy halo will (hopefully) be a lacy cowl for one of my friends.  She works in a (cold) office, and tends to wear a lot of scarves and what not.  I think this will be right up her alley.  I hope.  But man, have I messed up a bunch on this already.  Hopefully it won't be noticed.  I have, however, learned couple of new skills with it: 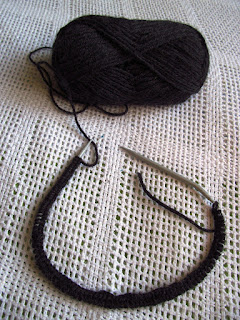 Here's another started gift, a toque for my brother.  Except that I cast onto a larger needle to keep the cast on stitches loose, and was going to transfer it to a smaller circular needle.  Except that I'm using the needle for the cowl above...oops. 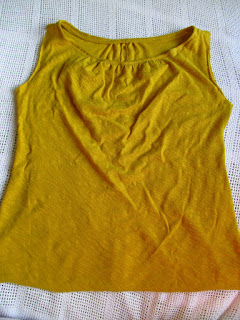 Oh hey look, it's a sewing project!  You might recognize the fabric, it's the top I mention here (aha, let's not talk about the wardrobe contest) out of the fabric that Kristin sent me.  I just need to sew on the sleeves and hem the blasted thing, but my sewjo is completely gone at the moment.  It'd better come back soon though, because I have a pair of pants I need to hem for an interview on Monday.  Yeash.


But Wait! What is This?  Are These FINISHED OBJECTS?!

AHA I lied, I do have a couple of finished projects!

The first is a set of dishcloths that, once combined with some locally made soap (using our Territorial flower too - woo all Yukon made!), made up a house-warming gift for Heather over at FussWorks.  :)  The dishcloths were pretty easy to do, although the sead-stitched stripes were a bit more difficult and I had to frog one section about 3 times before I got it right. 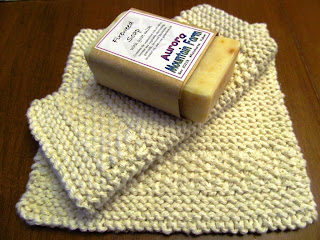 The other FO is a lacy scarf from a knitting book I took out from the library, Last Minute Knitted Gifts.  It's a fantastic book with lots of cute projects in it, but if you can find all of the projects on Ravelry, including any corrections to the patterns.  And there's a lot of corrections.  Which is kind of annoying. 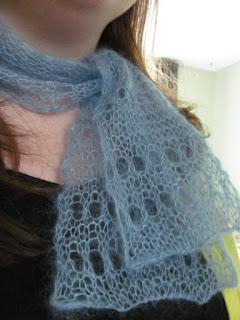 No corrections on this scarf though.  It's a super simple pattern, and taught me just what the YO, k2tog combination does (hint: the eyelet row).  It was also the first pattern that I ever blocked.  It grew a lot, which was good because boy was it small.  The hardest part of this project was dealing with the super fine and fuzzy (which likes to tangle together and is hard to rip back) mohair and silk yarn.  But boy is it luxurious when around your neck!

So that's where I'm at.  Sorry for the lack of posts lately.  I've been working away on stuff (as you can see), but I haven't really felt like sharing.  And then you know how it is, it builds up on you and suddenly it just all seems overwhelming.  Hense the post of WIP (and FO) DOOM.

Hope you're WIPs are becoming FOs!
Posted by Heather at 12:40 PM 4 comments:

Whose Who? NOW WE KNOW!

HEY LOOK, I'M ANNOUNCING A WINNER!  Well, you're all winners because you're all very awesome.  Not me though, because I'm only announcing the lucky person who won the accidentially child-sized owl toque now. 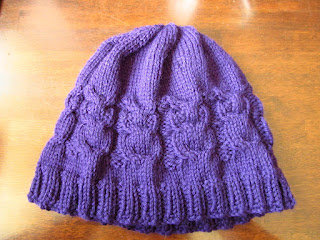 But you'll forgive me, right?  I'm only...3 days late.  Yeash, that's awful.  I have no excuse.  I did the draw via random number generator, then got distracted by shinies and forgot to post about (or contact) the winner.


So now that you've read all that and doubly want to strangle me, the winner is....Suzy from Suzy Bee Sews!

As usual, I wish I could send something for all of you, especially since it sounds like there's a lot of little heads out there who'd love a purple owl toque.  If you or someone you know (and can beg/bribe/blackmail) knits, the (free!) pattern can be found over here.

Hi there, all you awesome people.  Just a quick reminder to sign up for my giveaway for an accidentally child-sized owl toque!  I'm doing the draw this evening at about 6 pm PST (west coast of Canada if that helps), so go on over to the giveaway post to sign up!
Posted by Heather at 2:20 PM No comments: