McCall's 6279 Trench Dress: Fabrics Shopping, a Muslin, and a Call for Suggestions 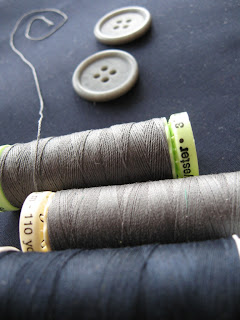 Guess who got her major report in, just in time for her birthday? I DID I DID! So in celebration of both events, I'M SEWING!

As I mentioned in the last post, Fabricland was having a sale on patterns, and I insisted on going to pick them up. However, I guess the stores in Western Canada has different sales than in Eastern Canada, so McCall's patterns weren't actually on sale yet, not until after March 21. But that was fine. I picked up some fabric anyways, for McCall's 6279 Trench Dress. 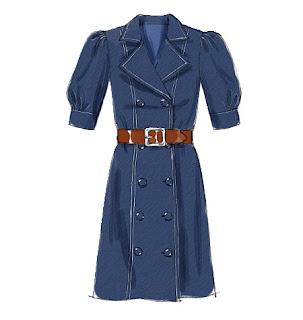 I really want this dress to be formal enough to wear to my thesis defense, fabric choice was essential. I wanted a solid navy blue fabric, and really had to fight my tendency to gravitate towards the funkier colourful prints. Found this lovely cotton poplin in a navy, and then proceeded to spend the next hour trying to pick buttons. There's so many choices! Do I go with something to blend in or stand out? But since I'm loving grey and navy right now (and the navy-coloured buttons were all ugly and hard to match), I chose these swirly grey ones. Some grey topstitiching thread, and I'm good to go. 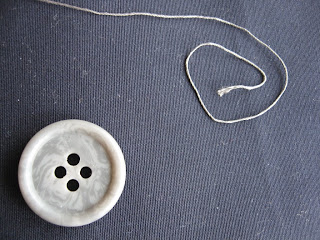 I'm a little worried that the poplin would be too lightweight. It's pretty thin, and after my experience with my awful pants, I'm leery of stretch cotton poplin. But then Fuss suggested I line the dress, and after a bit of research (and this great tutorial), I decided that's exactly what I was going to do!

So today, I ventured back to Fabricland to pick up the patterns (McCall's 6279, McCall's 5525, and McCall's 6286) and some lining fabric. Guys, I searched that store top to bottom trying to find exactly what I wanted, and what I wanted was a large patterned slightly funky but not sweet floral print. And as I was about to give up and settle, I found this cotton voile (look at me go, knowing my fabrics!) in the discount area for $5/m. 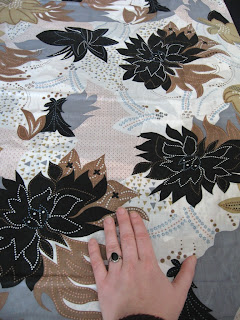 It's PERFECT. Almost a shame to be using it as a liner.

Anywho, this evening I came home after a birthday dinner with my Uncle and Grandma (mmm..brownie and ice cream), and got right into it. Worried about the fit, I decided to make a muslin (also Fuss's idea). I cut a size 16 (boy my measurements sure have changed since last summer!) and whipped up the dress in this horrid white teeny floral fabric. 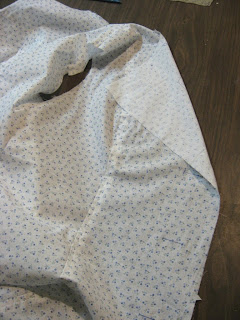 I think it's a pretty good fit. I unfortunately didn't take any pictures (or maybe fortunately) since you can see my gotch underneath the white. It's a little too snug around the hips, so I'm adding about a 1/4 inch below the waistline. 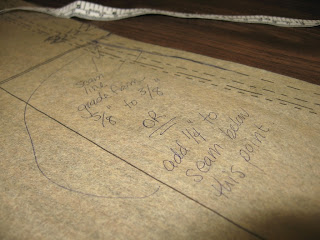 I've also noticed that most tops I've made in the past look weird around the shoulders, and I think it's because my shoulders are narrower than most patterns draft for. When wearing the muslin, I pinned back the shoulder to about where I'd like the seam to lie, and I think I need to take in about 1/4 inch to 3/8 inch. 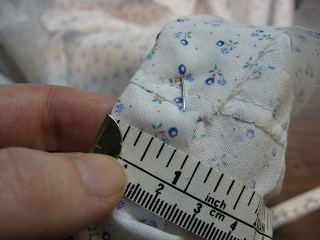 Despite it being a muslin, I practiced topstitching all the seams, and I'm glad for the practice. I was all over the place at first, but got used to it after 6 seams!

I don't even think I need to do a FBA!

I can't tell you how excited I am to be sewing again. I was dishearted after the failed muslin for the Simplicity 2254 top and haven't been able to motivate myself to go back and fix it (never mind the lack of time). But boy has this put the spring back into my step! 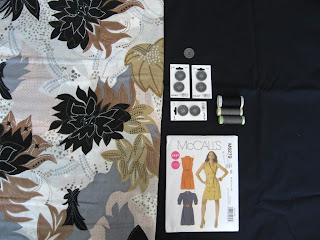 But I need your help. What should I call this dress? Since it's for my thesis defense (in late April? Early May?), I'd like to call it something along those lines. But I'm not very creative with naming things, so I'd love to pick your brains! Mmm...brains... 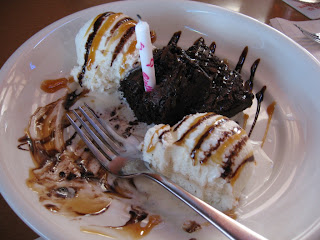 Today was an awesome day. Perogy pizza, beer, brownies, fabric shopping, and sewing. Best birthday ever!
Posted by Heather at 2:34 AM