I noticed while making the fabric belt that Maggie was chugging a bit while top stitching along the edges of the belt, and that she was struggling to get through some of the thicker sections. I've been meaning to clean and lube the poor dear for a while now, so I figured it was time. Especially since I didn't do it when I first brought her home, back in February.

(I couldn't resist adding my own note below the original purchase date when I picked her up. I know that I am the second owner for Maggie, and it's neat to see that she's been loved since 1973, when she was originally bought in either St. Johns, New Brunswick or St. John's, Newfoundland.)

Anywho, I had noticed the dust bunnies were starting to muster in for a revolt, so either way, it was time for a cleaning. And oh man, was it ever! Would you look at that fluff! 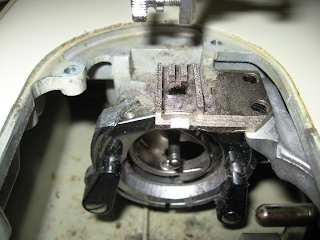 I'm almost too ashamed to be posting this, but I figure if I can ignore it so long that it gets to this point, others probably have as well, and this may encourage them to peak under the hatch and ferret out any dust armies gathering forces. 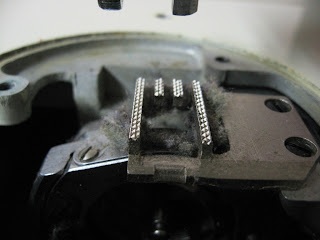 This is the shuttle race, which normally hosts the shuttle, shuttle race cover, and bobbin thinger. Also very fluffy. The whole thing practically fell apart when I pulled apart the levers, and I feared never putting it back together again, but it was easier than it looked. 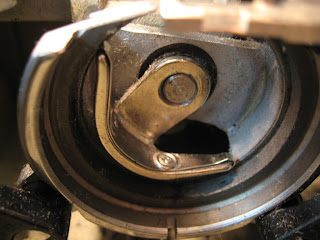 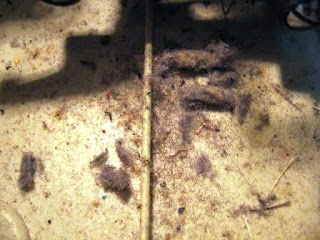 So once I got that all cleaned out using a soft (old) tooth brush and lots of paper towels, I moved onto oiling this section. Except, the instructions were a little vague. I didn't understand their little diagram telling me where to oil. 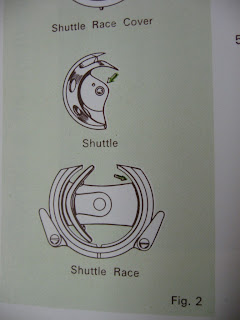 I wasted some time looking online, but nothing pinged. Poked all over PR, with no gold. Finally, I just went and poked around in the machine, putting the whole shuttle assembly back together to see what parts rubbed together, then put a bit of oil on them. I've pointed out the two spots marked above in the follow pictures, in case anyone else wants to see.

The shuttle (half moon shaped piece) slides against the surface the screw driver is touching, so put a drop of oil there, as high up as you can reach in the awkward little space. Maybe they call it the shuttle race because the shuttle races along it! Ooo the things you learn when you poke around and take things apart. 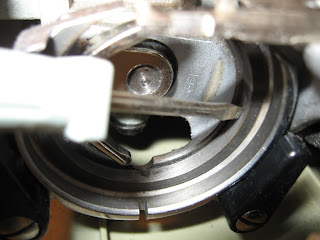 The bobbin holder thinger rubs agains the centre pin of the shuttle. I recommend adding oil after putting it back on the shuttle race, or else you'll get oil all over your fingers. You can guess how I learned that little tid bit! 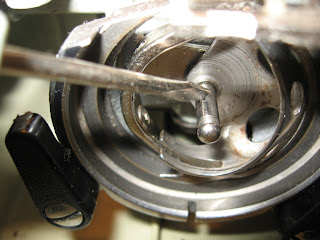 The pictures above show the shuttle installed on the shuttle race. (Please disregard the little rusty spots. Poor dear is getting on in years; she's developed a few age spots and she's self conscious of them. Ssshhhhh.) Below shows the shuttle assembly put together with the shuttle race cover on and the levers clicked in holding it all together. 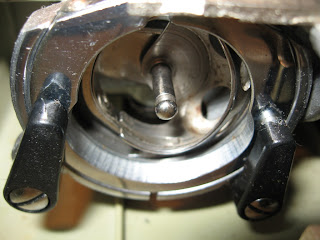 Now that's much better! Look how shiny and clean she looks! No more dust bunny armies down here. 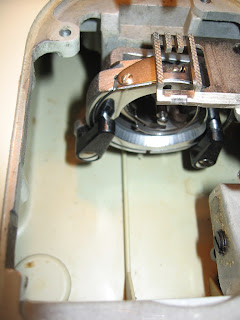 Here it is all put together again (except for the needle plate, which I forgot to install before taking the picture). 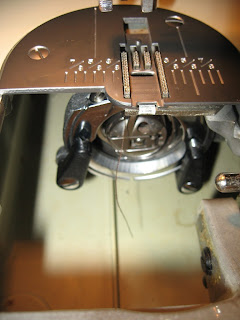 The next part of the instructions in the manual involved oiling under the arm cover plate, but I've run into a bit of a snag. 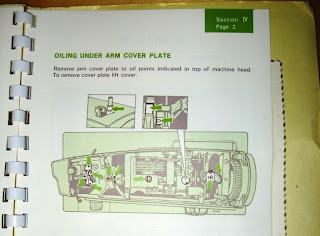 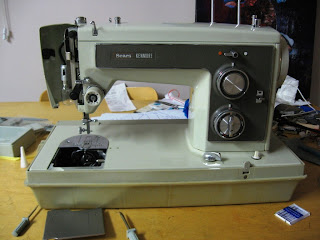 I can see the seam for where it should pop off, but I don't know how to do it. There's no screws anywhere that I can see, and I'm afraid to start trying to twist off some of the thing-a-ma-jiggies on top of the machine. 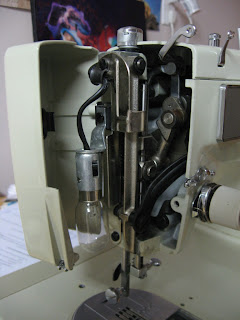 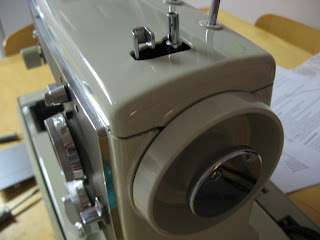 Google failed me again, so I'd love to get some advice on this. Does anyone out there know how to remove the arm cover plate on a Kenmore 1410 zig zag sewing machine? Do I even need to oil under there? I did come across one "sewing machine expert" (granted in regards to a different machine entirely) who said that it shouldn't need to be oiled under there. But Maggie is about 37 years young, and anyone's joints could get stiff after a while.

So dear readers, do you have any advice for Maggie and I? I'm afraid I'm too late to get any assistance from Sears. 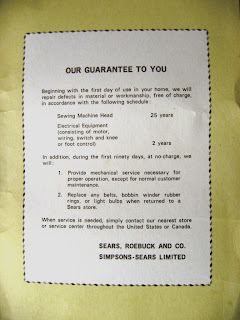