How I Learned to Sew

Steph over at 3 Hours Past was discussing how she learned to sew, and I realized half way through writing up my own history that it was long enough to be it's own post. Plus I thought that you all may be interested, so I thought I'd share.

I come from a family of home sewists, although most of them are 2 generations back. Three of my Grandmothers's have always sewn, either quilting like my Memere, home decor and self-stitched clothes as my Mom's Mom, or almost the entirety of her and her family's wardrobe like my Dad's Mom. As did my Mom come to think of it, although she mainly stuck with making our Halloween costumes. By the time I was old enough to show interest, my Mom and her Mom were no longer sewing, and I didn't meet my Memere until much later. However, my Dad's Mom was actively sewing when I was a child and she taught me the basics. Later on, I took sewing in grade 7 or 8 when we still lived in the city and I attended one of the big local schools. I remember making stuffed bears and sweat shorts and other similar little things, and not having much of a problem doing so since I already had the basics. 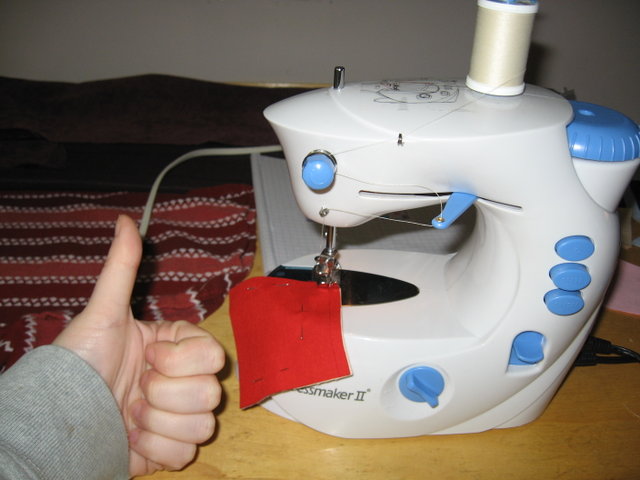 After that, I sewed a bit, on and off, usually when I visited Grandma in the summer. Later on, my Mom bought me Herbert for Christmas ($20 Walmart special...a little plastic thing - fit perfectly in a tote bag though), and I used it to hem curtains or t-shirts. When I moved to Kingston for Grad School fall of 2008, I brought him along with me. 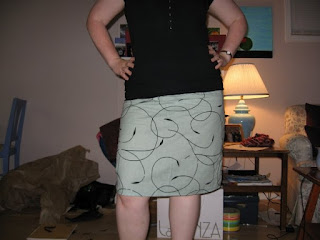 One of my first wearable garments, a skirt traced off from a thrifted skirt. I refuse to show my non-invisible invisible zipper.
I thought that sewing up a scrabble quilt for my Mom for Christmas 2009 was my first re-introduction to sewing, but my journal says otherwise. I started to pick up men's t-shirts and button-ups from the thrift store and played with them in late summer/early fall 2009. I mostly got inspiration from craftster.org, which basically consists of a sewing community that just does it dammit, and to hell with having the right tools and skills! I created a hoodie out of three t-shirts, tried to reconstruct men's button-ups to fit me, and basically putzed around. There were a lot of failures, but I was never discouraged because I learned a lot. One of my first successes was a skirt I made by tracing off a skirt I'd bought at a thrift store. I remember trying to sew from a pattern during this time, a pair of pants, but I made the classic beginner's mistake of using my RTW pants size and not my actual measurements size. Perhaps I was tramatized by the experience, and this explains my block with them? LOL! 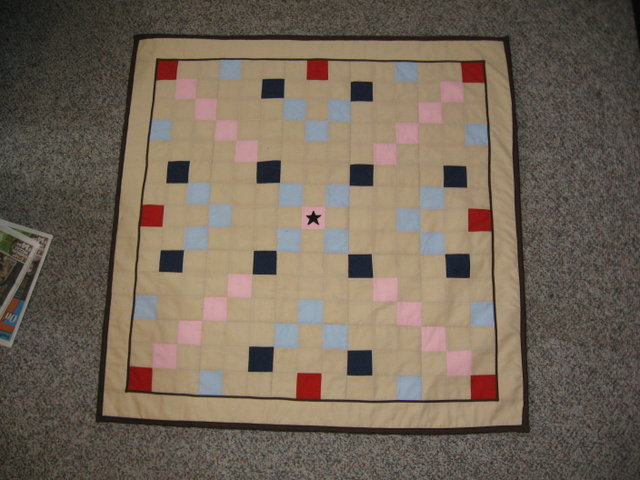 Scrabble quilt, measuring 3.5 feet x 3.5 feet. Almost entirely sewn on Herbert, although I stitched the layers together and bound it on my Grandma's Kenmore.
I dabbled in quilting, sewing my Mom that scrabble quilt I mentioned. I learned a lot doing that, the best of which was that accounting for seam allowance is very important. That quilt wound up a lot smaller than originally planned.

I eventually got a "new" sewing machine, a 1970's Kenmore that I blogged about here (along with a view of my Kingston sewing space. I'm still proud of my fabric organization skills, and have a similar set up now).

Thrifted RTW tank top with added lace and bow. I mourn getting rid of this when I moved to Manitoba. 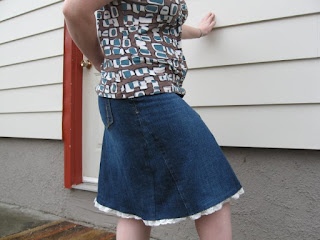 Denim skirt reconstructed from a pair of jeans. I still wear this. 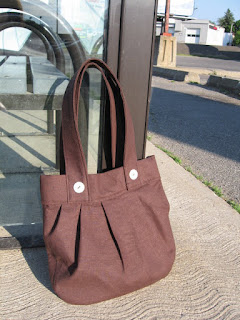 A purse made up from this tutorial from a tutorial from Disney at Ruffles and Stuff. I still use this purse, but it's starting to get faded and a bit threadbare.
I played around a lot with reconstructing garments, including a demin skirt from a pair of jeans that I still wear to this day. I made up maybe a half-dozen garments from a pattern (not all of which were successful), including this first me-made (from a pattern) t-shirt, when the 2010 wardrobe contest over at PR happened, and I decided to join up. What made me decide to do it, I don't know. I hadn't even sewn 10 wearable garments before this time, and I had to create a coordinating 10 piece wardrobe? I guess I was looking for a challenge. Something other than my M.Sc. thesis, anyways. 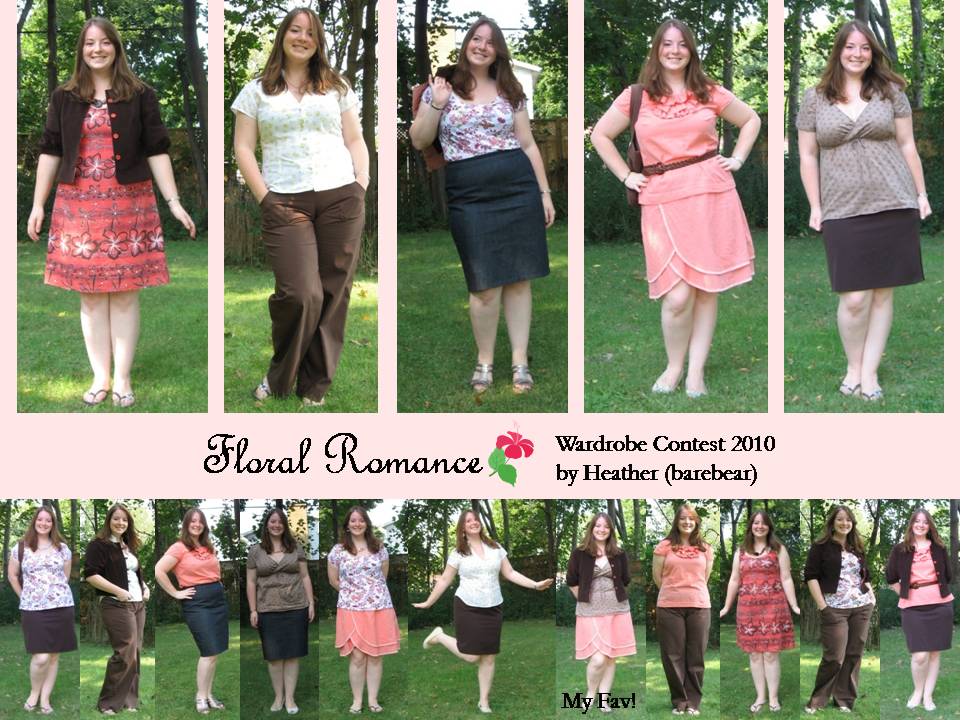 I think that joining this contest was the best thing I did for my sewing skills. It challenged me in a way that nothing else could've, and I gained a lot of friends in the sewing community - along with scads of help - by getting involved in the discussion over at Pattern Review. Just looking at my first and last garments, you can easily see how my skills improved by leaps and bounds. Where once I was content to have unfinished seams, wonky hems, and sketchy construction, I learned to:
I still have and wear many of these garments, although sadly some of them were tossed/donated when I moved to Kingston.

My sewing skills are still improving, as I hope they will continue to do in the years to come. I can't say that I'm more confident to tackle projects now, since I was pretty fearless to begin with. But I'm certainly more patience approaching more challenging projects, and I definitely have less failures than I used to.

And maybe someday, I'll get over my fear of pants.

What about you? How did you learn to sew? Were you self-taught, family-taught, or educationally-taught?
Posted by Heather at 9:39 AM

Email ThisBlogThis!Share to TwitterShare to FacebookShare to Pinterest
Labels: musings