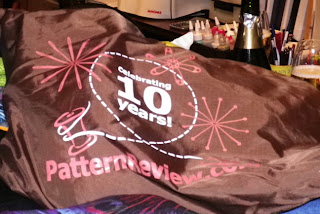 Photo taken by Sheila. Bag owned by Brenda. That is, until I can sneak it into my purse without her noticing.
So ages ago (on November 19 to be exact), sewists around the world gathered to celebrate Pattern Review's 10th anniversary. While we were a small crowd (of three: Sheila, Brenda and myself), a gathering did occur here in Winnipeg. 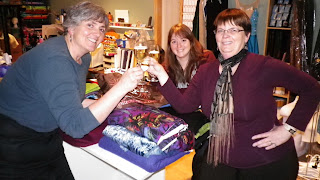 From left to right: Brenda (aka goal100 on PR), me (Heather aka bare_bear), and Sheila (aka SheBear0320). Photo by Sheila's husband, who was a good sport, an ice cream enabler, and basically hid in his man-cave the entire time, poor man.
The celebration included: 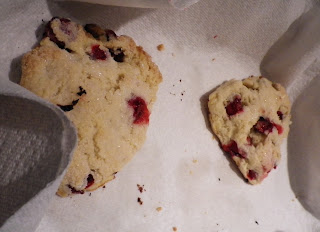 Our fabric haul. Photo by Sheila. 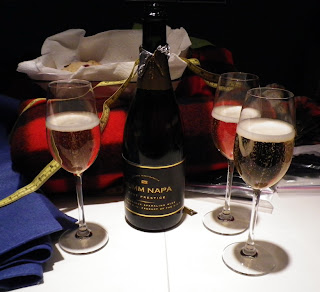 Mmm bubbly. Photo by Sheila.
All in all, it was a fantastic day! Exhausting, but so much fun. The best part was meeting two awesome and talented Winnipeg sewists, even if they are horrible enablers. (Stop tempting me to go back to Northwest Fabrics, Sheila!)

Also, it turns out that Sheila has the best job in the world and sews for a living (hence her amazing sewing studio). She makes athletic apparel, most notably figure skating outfits, but is branching out to other sports as well. Please go check out her website Chianto by Sheila to see what she gets up to. Someday I'm going to convince her to hire me so that I can spend my days sewing too!

So we hit up three fabric stores that I didn't even know existed in Winnipeg. I'll bet you're wondering what I come home with, eh? I didn't go crazy, but I think I won the fabric race out of the three of us. I found some pretty black underwear elastic ridiculously priced at 10 cents/m at Economy Textiles, as well as a stack of quilting cotton. Need to go back there, because the prices are out of this world! 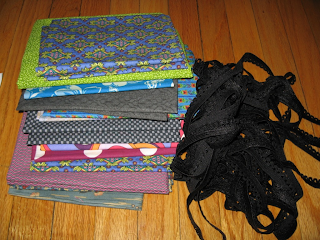 I found this lingerie pattern for wovens from a local woman at ...uh, I can't remember the name of the place. Not a huge selection of fabric, but they had some unique stuff, and the man who runs the place is apparently a wizard with sewing machine repairs. They also had a room in the back with some lovely pelts and leather pieces. Very cool. 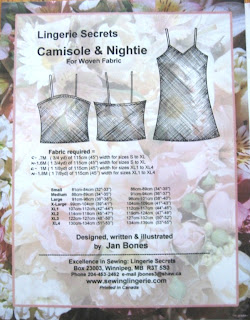 Finally, I was done in at Marshall's/Northwest Fabrics, which is the biggest fabric store I've ever seen! Maybe it's about the same size at Mitchell's, but it's all laid out on one big floor, and everything is sorted according to fabric type. I obviously need to spend more time here, to uh...learn more about different fabric types. Yeah, that's it...

Despite being completely overwhelmed, I managed to pull my wits together enough to trackdown the wool and lining I wanted to make a winter coat. Aren't they pretty! I love the burgundy. That was entirely Brenda, because I was going to make myself get the black wool, and she talked me into going with what I was drawn to, which was the burgundy. It's a melton wool, and the black is a flannel-backed satin. 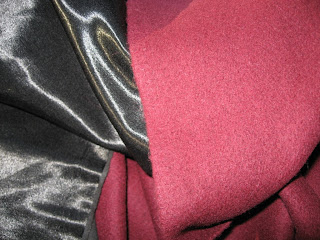 Obviously I need to fabric shop with other sewist more often. OR NOT, because youch I bought a lot of fabric! Thanks Sheila and Brenda!

And thanks, Pattern Review, for encouraging your members to celebrate and have fun for your 10th anniversary. Congrats on reaching such a milestone!
Posted by Heather at 4:41 PM