May I Introduce: the Hitchhiker's Jacket

Why is it called the Hitchhiker's Jacket, I hear you ask?  Well, remember back when I was complaining about having to trace this pattern from the Burda Magazine nightmare of a magic-eye pattern sheet?  I also went and whined all over PR contest discussion board too, and someone (probably in a bid to shut me up) suggested putting on an audio-book for less distracting entertainment.  The only audio book I had was the Hitchhiker's Guide to the Galaxy radio play, and lo! it worked!  I managed to finish tracing the whole thing without wandering off in boredom or dicking around on the internet.

And then I basically put the movie on loop whenever I was sewing the jacket, and it became sort of a thing.

This has been my mantra throughout the last days of finishing off this jacket.  It was a mad race to finish this ontime for the PR Refashion Contest, and I literally had minutes to spare once I submitted!  But I did it!  I was so worn out after finishing it, I sort of put off writing this blog post.  Sorry for the delay. 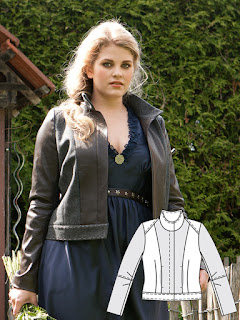 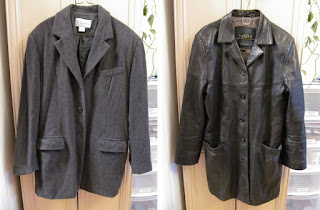 In the end, I'm glad I didn't add leather to the back panels, like I thought of doing while working on the toile.  Despite the size of the jacket, there just wasn't enough leather to cut out the pieces, especially once I cut the last facing the wrong way and had to seam together the last piece.  I did, in the end, change the triangular shoulder yokes from wool (as the pattern suggests) to leather, mostly because I was out of wool fabric.  I even had to patch together the wool waistband piece because I was down to scraps of wool.  (Although looking at the pictures, I really wish I could've done the waistband in leather.  Ah well, such is the way of refashioning - sometimes you have to make compromises.) 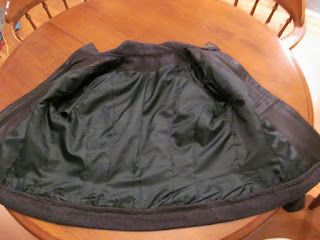 As you can see, the jacket is fully lined.  Yes, I know the bottom hem looks kind of wonky, my sewing machine rebelled from sewing that (nearly) last seam.  It kept chewing up the bobbin thread, and I had to pull the machine apart and clean it all out, and then add the leather needle I found after I finished sewing all of the leather (I used a size 12 needle with barely any trouble) before it'd finally plow it's way (slowly) through that seam.  Did I mention that this was at 5 pm, when the entry had to be finished by 8 pm my time?  Yeah, there were a lot of curse words and that DON'T PANIC mantra going on in my head. The very last seams I had to do were the sleeve hems, and I admit, I cheated a bit.  Because neither the leather nor the wool frays at all, I chose to simply fold them over once, tuck the lining underneather them, and stitch.  While this may not look all that professional, the seam line doesn't bother me at all, and the hem isn't bulky, and I've been doing everything I can to reduce bulk in throughout this jacket.  Plus it let me finish up quickly, and that was urgently needed at the time. One of the things I was super pleased with was how the pockets turned out.  They're set in the seam between the leather front panel and the wool side panel, and I worked hard to get them in properly.  What isn't clear from the Burda instructions is how small these pockets turn out in the end, because you actually sew the zipper right through the pocket, reducing the size by a third.  I can still mash my keys and my cell phone in them (although not in the same pocket), but it was disappointing.

Actually, the instructions were entirely disappointing.  I wound up mostly making it up as I went along, they were so convoluted and confusing.

The zipper itself was relatively easy to attach.  All I did was mark where the edge of the zipper teeth should go, glued the whole thing down using stick glue, and then stitched it down.  The only thing I don't like about it is that I was stuck using a plastic zipper because that's all that was available at my crappy local fabric store.  I would've much prefered a metal zipper, but this works in the end.

"The Babel fish," said The Hitchhiker's Guide to the Galaxy quietly, "is small, yellow and leech-like, and probably the oddest thing in the Universe. It feeds on brainwave energy received not from its own carrier but from those around it. It absorbs all unconscious mental frequencies from this brainwave energy to nourish itself with. It then excretes into the mind of its carrier a telepathic matrix formed by combining the conscious thought frequencies with nerve signals picked up from the speech centres of the brain which has supplied them. The practical upshot of all this is that if you stick a Babel fish in your ear you can instantly understand anything in any form of language. The speech patterns you actually hear decode the brainwave matrix which has been fed into your mind by your Babel fish.

Hitchhiker's Guide to the Galaxy, by Douglas Adams

I'm suprised at how warm this jacket is.  The night I finished it, I wore it to go pick up my roommate from the airport, and despite it being -16C (3.2F) and only wearing a t-shirt underneath, I was more than warm enough.  YEAH WIN! You guys have been awesomely supportive through this entire thing, and I guess I only have one more thing to say:


So long, and thanks for all the fish!
Posted by Heather at 1:18 PM