Wool and Construction and Lining (OH MY)

My boyfriend was really awesome last weekend and let me haul my entire sewing space to his place and park myself in a corner of his ginormous living room.  And then he was gracious enough to not get annoyed when I ignored him all weekend.  Good guy, my boyfriend.

Anyways, I cut the wool jacket to pieces and scraps.  You saw how much of it was left when I was done in my last post.  It was so tight getting everything I needed out of that hip-length jacket, but I managed it!  Unfortunately, I only took the one picture above during that process (above), but I think it was one of the neatest.  I managed to keep the chest welt pocket on the left front side pocket. 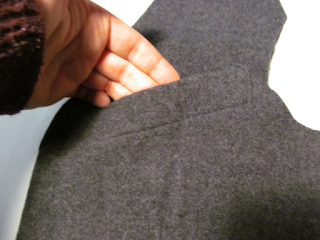 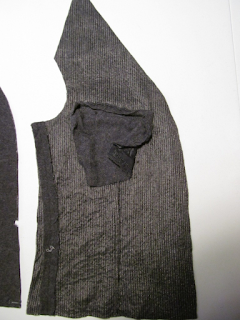 As you can see, this is a legitimate pocket, which was a nice surprise.  Especially considering the pocket opening was still sewn shut.  As you can also see, the entire front panels of the original jacket were lined with a light-weight fusable interfacing.  I like the stability it adds to the fabric, but it doesn't bulk or stiffen it up at all, which is good.

The other piece that I was happy with the cut out was the centre back piece.  When I did the toile for this jacket, I added a centre back seam in case I had to do a sway back adjustment.  I didn't - this jacket actually curves along my lower back and upper bum beautifully - but I liked the additional seam.  The original jacket had a centre back seam, and I just cut this piece directly on that seam, so I get the look, without having to sew that seam.  Go laziness!

Here's the back piece (inside and out).  I really liked the triangular yokes on this jacket, and since I was out of wool fabric as a design feature, I did the yokes in leather.  I still adore all the seams on the back!  Especially the curve it gives to the lower back.

To reflect the horizontal topstitching in the front panels, I topstitched at the shoulder seam.  I think the picture on the left looks cleaner, but it also reminds me of a jacket my Mom has in the 80's or early 90's, and while I know that look is coming back, it's not coming back in my closet. 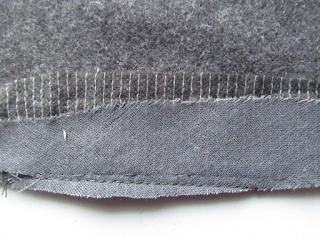 One of the things I learned from the wool jacket was how they dealt with the hems.  You can see that they not only used the fusable interfacing, but also a woven sew-in interfacing for extra stability.  Nice.

One of the ongoing issues with this jacket is reducing bulk...anywhere, but especially at the seams.  This leather is thin, but not that thin.  I trimmed every single seam I possibly could.

I don't think I've shown you the lining yet.  I wound up buying some at my local (crappy) fabric shop because the original jacket's linings were not in great condition.  I have no idea what the fibre content is, because our fabric store doesn't actually indicate that on any of their fabric.  It's basically a guessing game.  It's wasn't that expensive though, when everything there is expensive, so I don't have high expectations.  Of course, it was the only kind of lining there, and you know what they say about beggers. 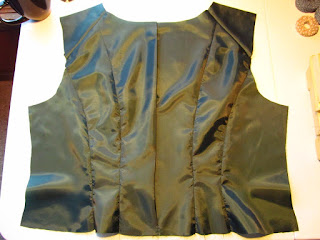 ANYWAYS, I chose this pretty deep green, which my camera doesn't really want to capture properly.  It looks almost black in some lighting, and a lovely dark emerald-green in others. 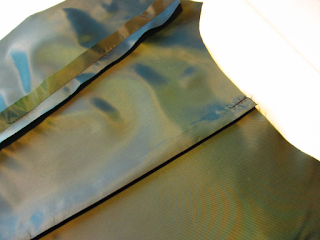 This wasn't included in the pattern, but I added a pleat in the centre back (obviously I didn't add a centre back seam).  The wool and leather has a bit of give, but the lining doesn't at all, and I didn't want to restrict my movement.

I'm much further along than these posts have shown.  The shell is almost entirely together, minus the waistband piece, and I just have to attach the sleeves to the lining before sewing it to the jacket.  Then it's just hemming the sleeves and attaching the waistband.  By tomorrow night.  Well, way before tomorrow night, because I have to take pictures and write a review still.  Oh gosh.  Was hoping to get the sleeves on the lining and sew the lining to the jacket tonight, but I think my brain hit a wall and I just couldn't do it.  Hense this post!